Published in For The Jerusalem Post and Israel Hayom, Friday, October 25, 2013.

Prince Bandar bin Sultan, the Saudi intelligence chief and power behind the Arabian throne, gave a bombshell talk to European diplomats this week; a talk that should shake the foundations of every foreign minister’s bureau in the world.

Bandar said plainly that Saudi Arabia was gravely disappointed with the United States for its malfeasance in (not) dealing forcefully with Syria and Iran, and that consequently the kingdom will make a “major shift” and downgrade its dealings with the US.

Bandar reportedly criticized Washington for failing to act effectively against Bashar Assad; for failing to back Saudi support for Bahrain when it crushed a 2011 Iranian-backed anti-government revolt; for failing to back the military overthrow of Mohammed Mursi’s Moslem Brotherhood government in Egypt; and most of all, for moving dangerously towards a thaw in relations with Teheran. Riyadh “doesn’t want to find itself any longer in a situation where it is dependent (on America).”

Saudi Arabia’s former spy chief and ambassador to the United States, Prince Turki al-Faisal, also hit out at the White House this week for its embrace of an agreement to eliminate Syria’s chemical weapons instead of carrying out a cruise missile strike against Assad’s forces. “The current charade of international control over Bashar’s chemical arsenal would be funny if it were not so blatantly perfidious, and designed not only to give Mr. Obama an opportunity to back down but also to help Assad to butcher his people,” said Prince Turki.

The Saudi uptake on all this, Bandar said, is a decision to “limit interaction” with the US, raising questions about future arms purchases and oil sales. And in an unprecedented move last week, Saudi Arabia rejected its first offer of a seat on the UN Security Council; a move widely interpreted as a slap at the US.

In short, the Saudis smell that the Obama administration is selling them out. In particular, they sense that Obama is cooking-up a “grand bargain” with the Iranians that will give Teheran predominance in the Gulf and beyond, leaving Saudi Arabia at extreme disadvantage. They smell American debility and betrayal.

The astute and unapologetic Saudis always had a good nose for the shifting scents and odors of this unforgiving region. They never have had a problem distinctly sniffing out allies and foes. And they never have had difficulty in acting independently to protect their interests. Now it seems that they are preparing to shift directions – away from Washington’s weakness.

The titanic Saudi shift comes as no surprise to anybody whose nostrils have been alert and eyes have been wide open over the past five years. It can’t possibly be a surprise to Israeli leaders. In fact, I’m sure it isn’t any surprise at all to Prime Minister Netanyahu. Note Netanyahu’s remark a few weeks ago about surprising “converges of interests” that are emerging in the region. I think that he was hinting at serious Saudi-Israeli talks.

Just like Israel, the Saudis fear that Obama is preparing for a seismic shift in US alliances in the region, moving from partnership with the much-weakened princes of Saudi Arabia and the much-maligned leaders of Israel to a “grand civilizational bargain” with the powerful and assertive ayatollahs of Iran. As such, the Saudis are concerned, like Israel, that Obama might quietly acquiesce in Iran’s climb to near-nuclear status in exchange for understandings with Tehran on division of power in the region.

In past I have noted that Barack Obama very clearly believes that America acts with too much hubris in its foreign and defense policy. He thinks he can leave the world a better place after eight years in office by cutting America down to size, and allowing other, just-as-moral (in Obama’s eyes) powers to emerge – such as, perhaps, the powerful Islamic leaders of Teheran.

It appears that the Saudis understand this. They intuit that Obama actually believes that the humbling of America will bring healing to the world; that bowing before Ayatollahs Khameini and Rouhani will make the world a better place.

In this situation, Israel has no choice but to dance artfully: Maintain the strategic alliance with Washington as best as possible, while waiting for the eight lean years of Obama to end, and then hope that America will snap back to itself.

In the meantime, Israel must be careful not to rely exclusively on American guarantees or assurances on key security and diplomatic matters. Jerusalem must safeguard its national interests – in coordination with Washington where possible, and independently where necessary. Even if this means working with the Saudis behind Obama’s back. 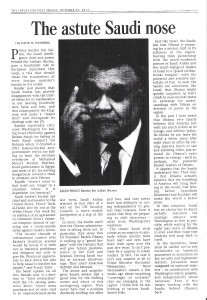