Rabin’s true legacy is Israel’s struggle for secure and defensible borders, and great wariness of Palestinian statehood. The use of Rabin’s name to support a galloping-forward pro-Palestinian-state peace process – is left-wing historical revisionism.

The eighteenth anniversary of Prime Minister Yitzhak Rabin’s tragic assassination was marked this week with the usual palms and paeans to the Oslo diplomatic process that Rabin undertook. President Shimon Peres, Oslo’s father figure, used the opportunity to proclaim that “the only path to peace is the two-state solution. This is Yitzhak’s inevitable and ultimate legacy.”

But I wonder whether this is true.

In fact, Rabin may have been close to calling-off the Oslo process, according his daughter, Dalia. Three years ago, she told the Israeli newspaper Yediot Ahronot (October 1, 2010; summarized in English in YnetNews [4] on October 14, 2010) that “Many people who were close to father told me that on the eve of the murder he considered stopping the Oslo process because of the terror that was running rampant in the streets, and because he felt that Yasser Arafat was not delivering on his promises.”

“Father after all wasn’t a blind man running forward without thought. I don’t rule out the possibility that he was considering a U-turn, doing a reverse on our side. After all he was someone for whom the national security of the state was sacrosanct and above all,” said Dalia Rabin.

In his book The Long Short Way (Yediot Ahronot Press, Hebrew, 2008), Moshe ‘Bogi’ Yaalon wrote that a few weeks before the assassination, Rabin told Yaalon (who was then chief of IDF Military Intelligence) that after the next Israeli elections “he (Rabin) was going to ‘set things straight’ with the Oslo process, because Arafat could no longer be trusted.” And this was before the murderous Second Palestinian Intifada!

Prof. Efraim Inbar, director of the Begin-Sadat Center for Strategic Studies, surmised much the same thing in his award-winning book Yitzhak Rabin and Israel’s National Security (Washington: Woodrow Wilson Center Press and Johns Hopkins University Press, 1999, pages 149-165): “At the end of 1994, Rabin was very pessimistic about Arafat’s performance…. He told the Knesset on October 3, 1994 that ‘(Arafat’s) results up until now have been far from satisfactory – to use an understatement’… Rabin’s disappointment with the policy, which was not initiated by him but for which he was ultimately responsible, became more and more evident with the passage of time and reflected the public’s wary mood toward the peace process… He did not exclude the possibility that the Oslo agreements might not lead to reconciliation. He was not sure that an agreement on final status issues with the Palestinians could be reached… Yet he was caught in the dynamics of a process no longer fully under his control….”

“Rabin wrote in 1979 that ‘there is no doubt whatsoever in my mind that the risks of peace are preferable by far to the grim certainties that await every nation in war.’ But even when many around him celebrated and were bursting with optimism, he remained the eternal skeptic and pessimist. Only rarely did he project enthusiasm and elation about his political path….”

“More often than not,” continues Prof. Inbar, “Rabin expressed his doubts, his qualms about an uncertain future. He perceived an improved strategic environment containing less chances for existential dangers, but he knew that such military challenges still existed. He was unmoved in the belief that an armed peace was the best to which Israel could aspire in the near future.”

In an interview in The Jerusalem Post on September 24, 1995, a month and a half before his assassination, Rabin said that for at least the next thirty years, Israel would have to maintain its military strength and not cut the defense budget.

Inbar recalls that Rabin once said that a Palestinian state would be a “cancer” in the Middle East, and that Rabin often expressed his preference for Jordan as the more responsible partner for securing Israel’s eastern border in the long term.

Rabin then rejected the notion of withdrawal to anything approximating the 1967 lines, and dismissed any thought of dividing Jerusalem: “We will not return to the June, 4 1967 lines. The security border of the State of Israel will be located in the Jordan Valley, in the broadest meaning of that term.” (Rabin meant to include the eastern slopes of the West Bank hills – a 1,200 foot topographical barrier ridge.) “The responsibility for external security along the borders with Egypt and Jordan, as well as control over the airspace above all of the territories and Gaza Strip maritime zone, will remain in our hands,” he averred.

Rabin also ruled out removing any settlement before coming to a full peace agreement with the Palestinians. “We committed ourselves before the Knesset not to uproot a single settlement in the framework of the interim agreement, and not to hinder building for natural growth… And first and foremost in our concerns is a united Jerusalem,” Rabin continued, “as the capital of Israel, under Israeli sovereignty.”

So it’s very possible that the ongoing drive to establish a Palestinian state in the grandiose contours envisioned today by the international community and the Israeli Left, and with the malfeasant Palestinian leaders we have today – is not Rabin’s true legacy at all. In fact, the use of Rabin’s name to support a galloping-forward pro-Palestinian-state peace process – is left-wing historical revisionism.

It’s rather more likely that Rabin’s true legacy is the determination to struggle for peace within secure, defensible, and historically just borders for Israel, without illusions.

It is this less fanciful and more faithful appreciation of Yitzhak Rabin’s legacy that is worth honoring and remembering this week.

And it is certainly worth noting, perhaps with a tinge of irony, that today’s Benjamin Netanyahu sounds a lot like Yitzhak Rabin of the early 1990s. Shimon Peres of today, with his clap-happy cheer-leading of Palestinian statehood as if Oslo had no bitter aftertaste, certainly does not. 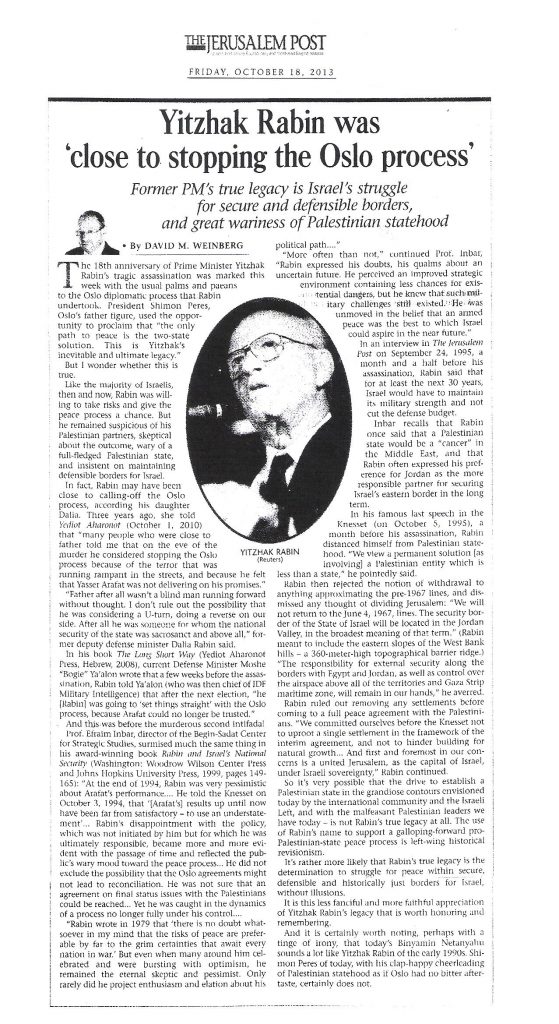