Beware Obama’s emerging understandings with Iran. Heed his long-term goals of resetting America’s relations with the Muslim world, and don’t underestimate his willingness to undercut current allies (including Israel and Saudi Arabia) in the process. Could it be he is planning a seismic shift in U.S. alliances in the region, from the Saudi princes to the Iranian ayatollahs?

Published in The Jerusalem Post and Israel Hayom, Friday, October 11, 2013.

Ignoring Prime Minister Netanyahu’s demand for complete dismantlement of Iranian uranium enrichment facilities and no let-up on sanctions, high-ranking European diplomats who were here in Israel this week indicated that they will settle for far less than that.

They did not rule out the possibility of reaching an interim agreement with Tehran that would ease some of the international sanctions on Iran, in exchange for restrictions on that country’s uranium enrichment and increased monitoring of its nuclear facilities.

Intelligence Minister Dr. Yuval Steinitz has called the proposals cosmetic and irrelevant, since the reported Iranian willingness to limit uranium enrichment to 20 percent is insufficient now that Iran has thousands of centrifuges operating that can enrich uranium at a faster pace than before.

Israel doesn’t oppose a diplomatic solution to Iranian crisis, Netanyahu and Steinitz have said, as long as Iran is left without the capacity to build a nuclear bomb. And with the Iranian economy 18-months away from collapse, says Steinitz, now is not the time to ease-up the sanctions regime but rather to press Iran to the limit.

In fact, the talks with Iran that the P5+1 powers begin next week in Geneva are dangerous on four levels.

Firstly, deliberations over any agreement are likely to drag out for months through the winter, giving the Iranians time to surreptitiously enrich even more uranium and to continue their explosives testing work.

Secondly, according to reports, the emerging understanding with Iran would leave the country’s nuclear development facilities intact, instead of dismantling them. This allows the Iranians to continue refining their nuclear skills. Even at low levels of enrichment (3.5 and 5 percent, which is not useful for a bomb) this provides a framework with which Teheran can bypass Western restrictions and hoodwink Western inspectors.

After all, Iran has clandestinely crossed every “red line” set by the West over the past 20 years – putting nuclear plants online, building heavy water facilities, refining uranium, working on explosive triggers and warheads, and generally breaching all its obligations under the Nuclear Nonproliferation Treaty – and has gotten away with it.

Consequently, Israel will accept nothing less than a complete dismantlement of the Iranian nuclear program, Netanyahu said at the UN last week, including an end to all uranium enrichment; removal of all stockpiles of enriched uranium; dismantlement of the infrastructure for a nuclear breakout capability, including the underground facility near Qom and the advanced centrifuges in Natanz; and a halt to the construction of the heavy water reactor in Arak aimed at the production of plutonium.

Any deal that scales back sanctions and allows Iran to keep operating its advanced nuclear development facilities even at a low-level – is a fatal bargain. So says a new study by Simon Henderson of the Washington Institute and Olli Heinonen, a former deputy director general of the IAEA. Centrifuge technology is easy to hide, and reaching low-level enrichment is 75 percent of the work towards a bomb, they warn.

Obama claims that his policy is prevention of an Iranian bomb, but he seems to have backed away from the commitment to stop Iran from gaining the capability to produce nuclear weapons. It seems that the P5+1 group is prepared to let Iran rest at the point where it is several turns of the screwdriver away from the assembly of an actual bomb.

Israel, of course, is not prepared to live with that.

WORSE STILL is the nagging suspicion that Obama’s emerging deal with the Iranians involves tacit recognition of their hegemony in the Gulf region – which is what Teheran is truly after. This was the implicit warning brought to Israel early this year by one of America’s top experts on Iran, Dr. Amin Tarzi, director of Middle East studies at the Marine Corps University in Quantico. “Iran wants nuclear capacity and a warhead,” he told the Begin-Sadat Center for Strategic Studies, “for imperial purposes, to prove that Iran is a special and great country, and to be able to dominate the Gulf region and the broader Middle East. Teheran is unlikely to use a nuclear warhead, but it wants to have one in order to achieve the status of a regional superpower, to be an equal partner with the US in dominating the Middle East.”

Could it be that Obama is prepared for a seismic shift in US alliances in the region, moving from partnership with the much-weakened princes of Saudi Arabia to a “grand civilizational bargain” with the ayatollahs of Iran? Might he quietly acquiesce in Iran’s climb to near-nuclear status in exchange for understandings with Tehran on division of power in the region? Keep the American withdrawal from Iraq in mind. Iraq controlled by the Shiites (and heavily influenced by Iran) could easily become a bigger oil exporter than Saudi Arabia.

It’s important to understand that large segments of the academic, diplomatic and defense establishments in Washington and New York don’t see Iran as an oversized threat to America. They view Iran as a rational actor, and are seeking a “Nixonian moment” in which Washington reaches strategic accommodation with Tehran, as it did with Beijing.

The soft signals and acquiescent music coming from prominent US think-tanks have been evident over the past two years. Washington wags close to the Obama administration, like the Center for a New American Security, and the Atlantic Council have been seeding the American diplomatic and political discourse with messages of capitulation to Iran, and paving the way for a climb-down from Obama’s declared policy of halting Iran’s nuclear drive.

One of the leading realist theorists of the past century, Prof. Kenneth N. Waltz of Columbia University’s Saltzman Institute of War and Peace Studies (who died a few months ago), actually argued in his last published article that Iran should get the bomb! It would create “a more durable balance of military power in the Middle East,” he wrote in the establishment journal Foreign Affairs.

Finally, could all this be a prelude to implementation of Obama’s grand vision of nuclear thinning-out and global disarmament? Obama could yet turn to the Russians, Chinese, French, Indians, Pakistanis, Iranians, and yes – to Israel too, with the demand to disarm. Israel has understandings with the US about its nuclear policy, originally reached by Richard Nixon and Golda Meir and reportedly reaffirmed in 1998 (by Clinton and Netanyahu) and in 2009 (by Obama and Netanyahu). But in the context of grand bargain with the Iranians (and by extension, with much of the Moslem world), might Israel’s nuclear status also be targeted for troublesome attention?

I say: Beware Obama’s emerging understandings with Iran. Heed his long-term goals of resetting America’s relations with the Moslem world, and don’t underestimate his willingness to undercut current allies (including Israel and Saudi Arabia) in the process. 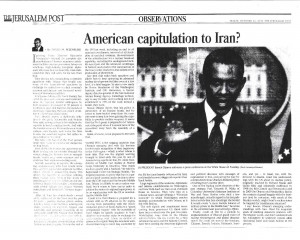