Pray for a predictable year

Published in The Jerusalem Post and Israel Hayom, Eve of Yom Kippur, September 13, 2013.

As we enter Yom Kippur, it’s clear that we’re not really in control. Our health, happiness and security are subject to whim and miscalculation, the sudden, unexpected and absurd. Life is fragile and unpredictable, especially in the Middle East.

We have irredentist Palestinians, Egyptian Islamists, Syrian chemical weapons, the missiles of Hezbollah, and the Iranian nuclear project to cogently remind us of our vulnerability.

So as you settle back in the synagogue pew or your living room armchair to contemplate life on the Day of Atonement, you might want to pray for stability; for a predictable year. Join me in the following prayers:

Pray for our soldiers lying in ambush opposite Hezbollah fighters on the Lebanon border or jihadi fighters along the Sinai /Egypt border. Pray for quiet.

Pray that the recent release of Palestinian terrorists (and the next planned releases) do not come back to haunt us.

Pray that Prime Minister Benjamin Netanyahu sticks to his self-declared red lines in the current negotiations. Pray that Netanyahu is given the stamina and courage to make the right, tough decisions with regard to Iran. Pray that we don’t (again) get caught flat-footed and surprised by an enemy assault.

Pray for Jerusalem; that it remain under Israeli control. Pray that we have the national backbone to reassert our sovereignty in the face of increasing Palestinian Authority encroachment throughout the city and on the Temple Mount.

Pray for US President Barack Obama’s backbone. May the Lord grant him one.

Pray that you never have to walk into a pediatric oncology hospital ward. Pray for friends and strangers alike who spend their days and nights in these tragic places. Ask G-d to keep you and your children out of emergency and operating rooms, cardiac units, and psychiatric wards.

Pray that classroom violence – experienced by one out of every three school kids – does not affect your son or daughter, and that they get to be part of the lucky 48 percent of Israeli kids who actually complete high school matriculation.

Pray for all the incredible volunteers in our society, who run thousands of non-profit associations devoted to social welfare, making Israel one of the most altruistic societies in the world. May they all be strengthened and rewarded!

Pray for the patience and humility that we need to treat our elderly parents as we would like our children to treat us.

Pray that all the international businessmen and government officials who visit Israel to marvel at our hi-tech triumphs will one day be equally impressed by our moral and spiritual accomplishments.

Pray for a “good news” media; for the emergence of Israeli journalists who ‘davka’ seek to highlight and showcase the beauty of Israel’s society.

Pray for more amazing archaeological discoveries, like the Torah scroll gold ornaments unearthed near the Temple Mount last week, and the Hebrew inscriptions from the Canaanite period found in the Ophel last year – which demonstrate to the world our rootedness in this land.

Pray for all the Israelis who aren’t praying: Those gambling the day away in Greece, cycling aimlessly through Tel Aviv, or unfortunately, just plain turned off by this country’s noxious mix of religion and politics. Pray for Jews who are in synagogue but who pray only for themselves.

Pray that we can tame our tendency to all-too-often harshly judge and stereotype each other.

Pray for your own faith and spiritual world. May it be enriched and deepened.

Pray, if you can, like Rabbi Yishmael Ben Elisha the High Priest, who according to legend was granted an audience with God and asked to bless the Almighty. “May it be your Divine will,” intoned the priest, “that your mercy overcome your anger; that you treat your children with compassion and forbearance; and that you judge them with leniency.” Amen. 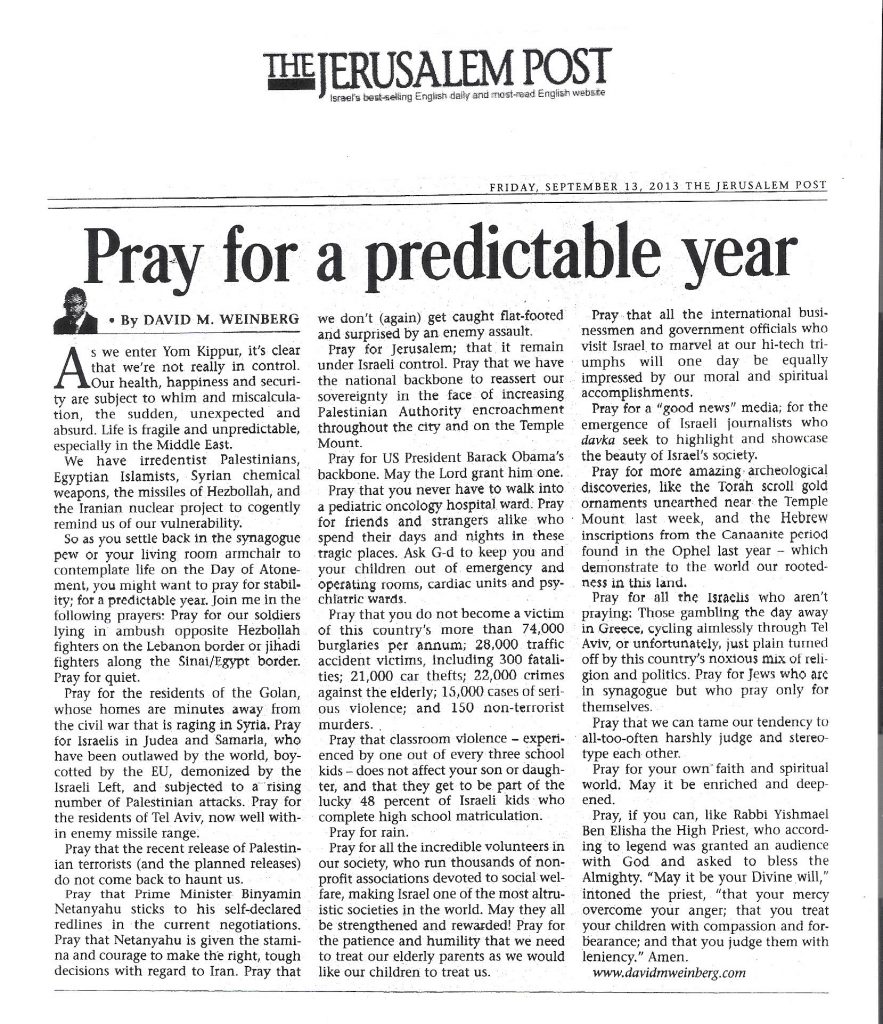