The international community has given almost blanket endorsement to the Arab interpretation of “international legitimacy” as it pertains to the West Bank. But by pressing false “truths” like the sanctity of the 1967 lines, the West encourages Palestinian obduracy and strips the peace process of any realism.

Published in The Jerusalem Post and Israel Hayom, August 23, 2013. 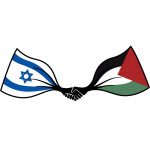 Going into the new round of Israeli-Palestinian peace talks, there is no indication that Palestinian leaders understand that they will have to compromise in order to reach an agreement with Israel. On the contrary. The Palestinians assume that their demand for a state on the 1967 lines (or thereabouts) is absolute “revealed truth.”

And why shouldn’t they think so? The international community has given almost blanket endorsement to the Arab interpretation of “international legitimacy” as it pertains to the West Bank; meaning, that the 1967 lines should be the border of Palestine. The Europeans, and the automatic totalitarian majority at the United Nations, have repeatedly ratified this contrived construct, giving it, as I say, the aura of “revealed truth.”

In fact, most world leaders have spent the past generation building-up and inflating Palestinian expectations. Consequently, Palestinian demands haven’t been modified or moderated since the advent of the Oslo process; in fact, they have hardened.

Even Washington has sinned in this regard. President Obama began talking about the 1967 lines (with some itsy-bitsy land swaps) as something sacrosanct five years ago, and Secretary Kerry may have assured the Palestinians of America’s support for the 1967 lines “as the basis of a Palestinian state” too. Saeb Erekat told a Nazareth Arab radio station this week that the US has given the Palestinian Authority written assurances to this effect.

By adhering to this fraudulent “revealed truth” and robing it in ardent legalism, the West unhelpfully encourages Palestinian obduracy, and strips the peace process of any realism.

As a result, the Palestinian Authority has no need to compromise. The worst that can happen is that the talks break down with Israel being blamed for its unwillingness to abide by “revealed truth.” Then Mahmoud Abbas will go back to the UN and International Criminal Court with his demand to brand Israel an outlaw and to sanction it. A world that subscribes to the “revealed truth” will sympathize with Abbas’ demand.

Israeli claims on Judea and Samaria, regardless of their historical, legal or security merit, are summarily dismissed when they run up against the “revealed truth.” And Israel’s demonstrable willingness to compromise for the sake of peace is dismissed as niggardly and insufficient.

Israeli governments over the last twenty years share some of the blame for this sad state of international opinion on the Israeli-Palestinian conflict. Israel chose not to engage in exhausting yet essential debates on the legal rights conferred upon the Zionist endeavor by the League of Nations, or on the unsanctioned amputation of Transjordan in 1922 from the Mandate, or on the transient nature of the 1949 armistice lines (which the Arabs never recognized as borders – until they lost control of the territories), or on the accurate meaning of resolution 242, or the legal status of the Gaza Strip and the West Bank before 1967 as “Res Nullius” (nobody’s property).

Israeli governments believed that it was preferable to come to the table seeking pragmatic solutions than to turn the process into an interminable lawyers spat. This was evidently a mistake, and the Palestinians have taken advantage of Israel’s resultant legal weakness.

After trying (and failing) to force Israel’s hand through violence and terrorism, the Palestinians today have no qualms about “legalizing” the conflict, and turning to the UN, ICC, and UNCHR to isolate Israel through international instruments of (de)legitimacy.

As a result, US Secretary of State Kerry has a tough task ahead of him: Disabusing the Palestinians of the notion that they can fall back on bogus “revealed truth” as their uncompromising bottom line. He has to dial-down Palestinian expectations and bring Palestinians towards compromise no less than Israelis.

Kerry also has to press the Palestinians to close the “peace gap.” Kerry cannot avoid the fact that many Palestinian political and religious figures still deny the historic ties of the Jewish people to the Land of Israel, and refuse to accept the legitimacy of Israel’s existence in the Middle East as a Jewish state (and that, in principle, includes Judea and Samaria). They continue to talk of a “Judenrein” West Bank, and to willfully destroy any Jewish historical sites or archaeological relics in territories under their control.

They also continue to demand the resettlement of Palestinian refugees in pre-1967 Israel as a way of swamping the Jewish state. They support and glorify Palestinian suicide-bombers and missile launchers against Israel’s civilian population, including Hamas rocket-bombing from “liberated” Gaza against southern Israel. The Palestinian airwaves and newspapers are filled with anti-Semitic and anti-Israel warlike propaganda. Palestinian leaders crisscross the globe and lobby every international institution to condemn and criminalize Israel.

And, as a consequence of the warm reception that this fanatical outlook receives in many capitals, the PA continues to make uncompromising territorial demands.

By contrast, Israelis have shifted their views tremendously over the past thirty years. They’ve gone from denying the existence of a Palestinian people to recognition of Palestinian peoplehood and national aspirations; and from insisting on exclusive Israeli sovereignty and control of Judea, Samaria and Gaza to acceptance of a demilitarized Palestinian state in these areas. Israel has even withdrawn all-together from Gaza, and allowed a Palestinian government to assume authority over 95 percent of West Bank residents. Israel has made the Palestinian Authority three concrete offers for Palestinian statehood over more than 90 percent of West Bank territory plus Gaza.

This asymmetry cuts to the core of the conflict, and along with the rootedness of artificial “truths,” is an enormous threat to the success of the new diplomatic process.

Negotiations that are about forcing false “truths” on Israel mean unacceptable erosion in Israeli rights and intolerable risk to its security. Diplomacy that is not informed by intellectual honesty, does not a peace process make.

The writer is director of public affairs at the Begin-Sadat Center for Strategic Studies. 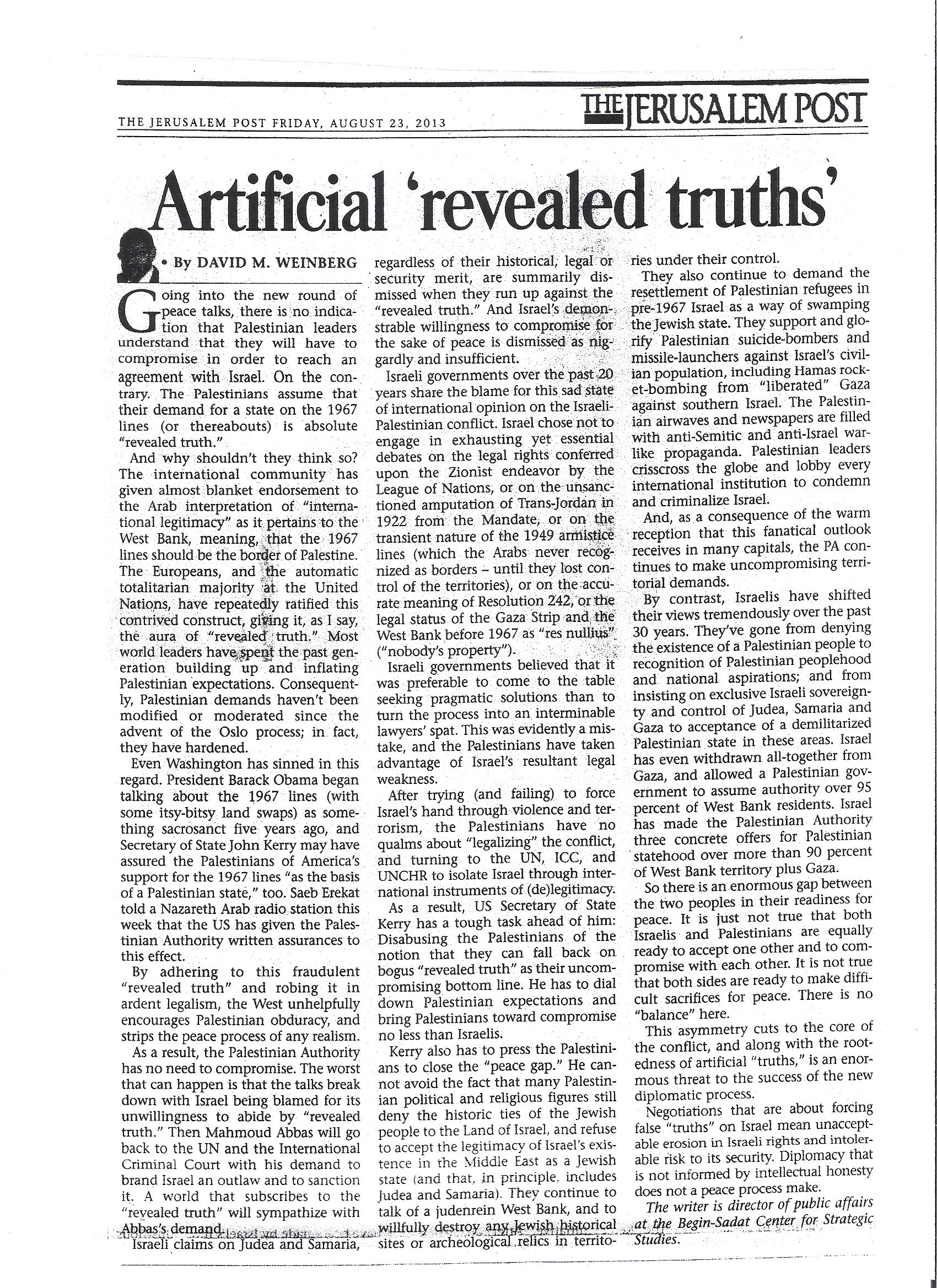 PrevPreviousAmerican “fixes” for the Middle East?
NextThe beautification of BasharNext