Catherine Ashton and her acrid European Union colleagues that are boycotting Israel are going to miss out on a lot of great Israeli wine. Perhaps it bothers the EU that there are Biblical echoes resonating in every glass…

Published in The Jerusalem Post on September 27, 2013. An earlier version was published in Israel Hayom as “Zionist Wine and Sour Grapes” on August 8, 2013. 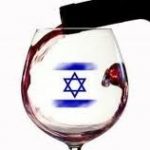 It is no surprise that the Jewish People’s return to its ancient homeland in the 19th, 20th and 21st centuries involves the reintroduction of grape-growing and quality wine-making in Israel.

Wine played a central role in ancient Israel, including in Temple libations and celebrations. The spies that Moses sent to scout the Land of Israel returned with miraculously giant grapes. Ezekiel prophesized “But you, mountains of Israel, you shall shoot forth your branches, and yield your fruit to My People Israel; for they will soon come” (36:8). And in the heyday of King Solomon’s rule, we’re told that “Judah and Israel dwelt safely, every man under his vine and under his fig tree, from Dan to Beersheba” (Kings I 5:5).

Archaeologists have found hundreds of ancient wine presses and wine storage amphorae from the First and Second Temple periods. Sadly, the Moslem conquerors of the Holy Land in the seventh century literally ripped all grape vines out of the ground and put an end to wine production for hundreds of years.

Today, the Land of Israel is again coming alive and giving forth magnificent fruit to its indigenous people after 2,000 years of desolation and neglect. As a result, there are excellent wines being produced in Israel, winning international awards and recognition. Six thousand hectares (60,000 dunam) of land is currently being cultivated as vineyards, mainly in the Galilee and Judean mountains, but also prominently in the Golan Heights and the Shomron (Samaria).

Unfortunately, Catherine Ashton and her acrid European Union colleagues are going to miss out on many good glasses of Israeli wine. Many of the grapes are sourced over the EU-sanctified “Green Line,” and for the EU this makes them forbidden and boycotted “settlement goods.” Ashton and company, I say, simply have a bad case of sour grapes. And perhaps it bothers the EU that there are Biblical, Zionist echoes resonant in every glass of good Israeli wine.

The Succot holiday and this post-holiday weekend is a wonderful opportunity to taste many different wines. Try, for example the deliciously crisp 2012 Sauvignon Blanc produced by Teperberg 1870 Winery from grapes grown in the Shomron mountains, near Shiloh. Or Teperberg’s intense and well-balanced 2010 Reserve Shiraz from the same Shiloh vineyard. (Of course, these wines are off-limits for Catherine Ashton).

Grab as many bottles as you can of the Psagot Winery’s 2008 Edom, a Bordeaux blend, from the Judean hills north of Jerusalem. Or buy the Tanya Winery’s round and fruity 2009 Halel Merlot, grown 900 meters above sea level in the mountains near Ofra. Ditto for the excellent Gvaot and Shiloh wineries, which straddle either side of Road 60 in the Samarian highlands. (Pour none of these wines for mordant EU officials).

If you have to share your Israeli wines with indignant foreigners who insist that Judea and Samaria must be handed over to the Palestinians, you’ll just have to pour wine from the (Hezbollah-coveted) Upper Galilee, an area which isn’t (yet) under European boycott.

Try the Benhaim Winery 2009 Grande Reserve Cabernet from the vineyards of Meron, or the Lueria Winery Grand Vital (a Bordeaux blend) from its Safsufa vineyards. You can’t go wrong with the Galilee Mountain Winery’s always-superb Yiron blend (currently pouring the 2009 vintage), which is from Kibbutz Yiron that sits just below a Hezbollah outpost right up on our northern border.

Veteran French winemaker Pierre Miodownick immigrated to Israel four years ago and his Domaine Netofa Winery in the Lower Galilee is already producing unique blends using varietals like Tempranillo, Touriga Nacional and Roussanne, which are native to Spain, Portugal and France’s Rhone Valley. Pierre argues that these grapes are meteorologically much more suited to Israel’s Mediterranean climate than the classic Bordeaux or Burgundy varietals.

Try his fresh 2012 Chenin Blanc, or his brilliant 2011 Latour Netofa blend of Syrah and Mourvedre (deep, full-bodied and mouth-filling with a nose of red plums and chocolate). And for dessert, Domaine Netofa’s Portuguese-true Fine Ruby Port (made from Touriga and Tinta Roriz grapes grown near Mount Tabor) is perfect.

For a real taste of Israeli innovation in winemaking, offer guests from abroad a sip of Carmel Winery’s “Mediterranean,” a creative blend of Carignan, Shiraz, Petit Verdot, Petite Sirah and Viognier, from vineyards from all over Israel including the Upper Galilee, Coastal Plain, Judean Hills and the Negev. The very finest wine of the Negev is of course the Yatir Forest, which received the incredible score of 93 in Robert Parker’s Wine Advocate magazine – the leading global wine publication.

Pour some biblically-evocative, Zionist, kosher wine this weekend, and drink it heartedly in celebration of Israel’s resurgence (and in defiance of European disapproval).