Old habits, it seems, die hard. European countries have a knack for restricting Jews to specific pales of settlement.

You gotta love that European Union. Always at the forefront of the drive for Mideast peace. So concerned about the sources of malevolence and violence in the region. Malevolent threats like Jewish families and businesses in Judea and Samaria.

At the moment, women are being raped left, right and center in Egypt and Syria, and Christians are being driven out or slaughtered with abandon in both these locations.

But don’t worry, Christian Europe is right on top of things. It is tackling those dangerous Israeli settlers raising their children and developing their businesses in Judea and Samaria.

Hezbollah is fighting side by side with Bashar Assad’s forces of butchery, and is about to get its hands on sophisticated Russian missiles along with Assad’s bio-chem weapons.

But don’t worry, the European Union is sure that Hezbollah is not a terrorist group. Instead, Europe is confronting those treacherous Israeli settlements.

Dame Catherine Ashton of the EU is delicately tongue-tied about the upheavals in Egypt. (She expressed mere concern, and mainly about the fate of the Moslem Brotherhood’s Mohamed Morsi). She is also perplexed into silence by the sharp increase in Iranian nuclear fuel production despite the election of Teheran’s new “moderate” poster-boy Rouhani. (I think she hiccupped a bit and daintily press-released on the matter this week).

But have no fear, Ashton is truly hard at work where it counts: Wrestling with those damn Israeli settlements. They need to be boycotted.

The Kurds – one of the oldest ethnic groups in the world – don’t have a state. Neither do the Tamils of Sri Lanka, the Uighurs and Tibetans of China, the Basques of Spain, the Chechens of Russia, or the Flemish of Belgium. However, thanks in part to the pressures of the sagacious EU, the Palestinians already have two states: A radical Islamic state in Gaza established by force against Israel’s will, and an authoritarian state-on-paper in the West Bank recognized by the EU and the UN against Israel’s will. Both Palestinian states are more interested in tearing Israel down than in building a decent political culture of their own.

The EU continues to pour oodles of money into an economically and politically corrupt Palestinian Authority – well over $7 billion since Oslo, aside from funds contributed separately by individual EU countries and additional support for UNRWA. This includes everything from training and equipment for the PA’s thuggish mini-armies and police forces, salaries for more than 50,000 PA bureaucrats, antenna towers and studios for the viciously anti-Semitic and murderer-martyr-glorifying Palestinian TV station, and hundreds of millions of euros for new PA textbooks which deny any ancient Jewish claim to Jerusalem and Israel.

But don’t worry. The EU is determined to put a stop to all fonts of radicalism – like EU scholarships for Hebrew University students who live in Efrat or Maale Adumim. After all, these students and their professors (who might also, G-d forbid, live in the “occupied” Old City of Jerusalem), are the real threats to peace in the region.

The EU is obviously pleased with the long distance (sic.) towards moderation that the Palestinian Authority has traveled over the past 20 years. (Oops, it hasn’t!) Europe is much less royally pleased with the distance traveled by Israeli governments, even though Israel has moved from rejecting Palestinian statehood to begging for it and offering to cede most of the West Bank and all of Gaza.

But in the warped weltanschauung of the European Union it is nevertheless logical to pressure Israel and kowtow to the Arabs.

The EU can’t get its own economic house in order; in fact its insolvency threatens the entire world economic order. And it handles its own Moslem populations so well. Nevertheless, Europe is so certain about what Israel’s borders ought to be that it is going to ram its view down the Jewish People’s throat via boycott and discrimination. Europe simply knows what’s best for the Jews and the Middle East, and it’s going to insist on it.

Old habits, it seems, die hard. European countries have a knack for judging and moving Jews. They’re actually quite experienced at banning Jews from schools and universities, depriving Jews of scholarships, and restricting Jews to specific pales of settlement.

Don’t you love that evenhanded, judicious European Union; always at the forefront of the push for Mideast peace? 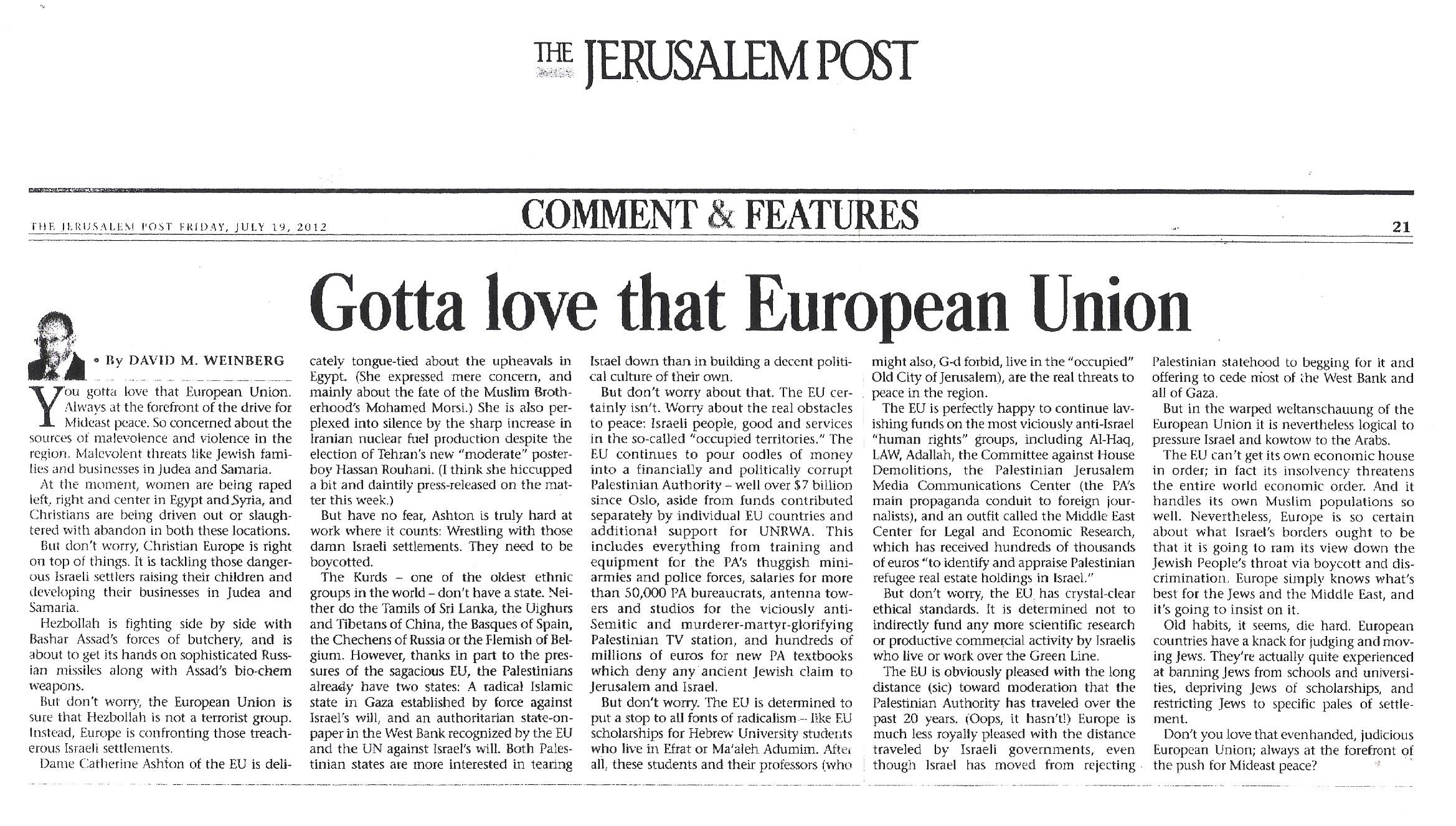