Is Netanyahu planning a unilateral move?

Netanyahu seems desperate for diplomatic movement, and I sense that he is preparing to launch a unilateral Israeli initiative to concede significant parts of Judea and Samaria. Israel must not be enticed into West Bank withdrawals for fleeting international approval and short-term political gain.

The music coming from the Prime Minister’s Office in recent weeks is anomalous. Prime Minister Netanyahu has been making uncharacteristically passionate statements about the diplomatic process; statements that go beyond the expected chatter about Israel’s desire to engage the Palestinians and negotiate a two-state solution.

One gets the sense that Netanyahu is desperate for diplomatic movement; that he has bought into the left-wing argument that the “status quo is unsustainable”; and that he is preparing to launch a unilateral Israeli initiative to concede significant parts of Judea and Samaria.

There is certainly a tremendous amount of international pressure on Netanyahu to do so. US Secretary of State John Kerry’s current effort to convene Israeli-Palestinian peace talks and bring about an agreement are unlikely to bear fruit. Even if Mahmoud Abbas agrees to come to the table, in all likelihood the talks will falter or blow-up quickly enough since Abbas is prepared to concede nothing.

Abbas rejects any further interim agreements with Israel. And even if Israel were to concede 99 percent of the West Bank, Abbas cannot sign an “end-of-conflict and end-of-demands” affirmation when Gaza is controlled by Hamas, nor will Abbas recognize Israel as a Jewish state. And Israel will not agree to any so-called “right of return” for Palestinian refugees and their descendants. So the chances of a permanent status agreement are zilch.

Nevertheless, international demands for Israeli action remain, and European threats of boycott and other isolating moves are increasing. The world wants to see proof of Israeli “seriousness” in the form of evacuation of settlements and other symbolic Israeli actions that denote withdrawal.

In this country too, there is a groundswell of “elite” (read: Leftist) opinion building in favor of unilateral Israeli moves in the West Bank – to “signal” to the Palestinians and the world that Israeli is “serious” about compromise; to “show” the world that Israel is not interested in “forever being an occupying power”; and to “help create conditions for the emergence of a stable two state reality” sometime in the future.

Orni Petruschka, co-founder of the Israeli organization “Blue White Future,” which is backed by many people from the orbits of former prime ministers Barak and Olmert, laid out the plan this week.

Israel should “firmly put itself on an alternative path towards attaining its goal of two states,” he wrote in Haaretz, even without a comprehensive agreement with the Palestinians, by creating a “framework for two states.”

This “constructive unilateralism” as he calls it, has Netanyahu announcing, independent of any negotiations, that Israel has no sovereignty claims over areas east of the security barrier. Israel would then follow-up this “constructive unilateral step in the international arena” with “constructive unilateral steps in the domestic arena” by enacting a voluntary evacuation and compensation law for those settlers who “prefer” to relocate to pre-67 Israel following Israel’s renouncement of sovereignty in these areas. Eventually, Israel would plan for the absorption of all settlers currently residing east of the barrier, without coerced evacuation. The IDF, he says, would not withdraw from the territories until a real peace agreement is reached with the Palestinians.

Petruschka calls this smart bargaining, because it would, somehow and supposedly, “strengthen Israel’s negotiation position by demonstrating Israel’s willingness to take its destiny in its own hands”; it “would move Israel closer to its coveted prize of being a truly Jewish and democratic state, regardless of whether there is a Palestinian readiness to cooperate”; and it “will facilitate the resumption of negotiations and enhance the prospects for closing the deal and reaching the long-desired comprehensive agreement.”

Every single one of these statements is counter-intuitive and demonstratively false. Israel’s negotiating position would be weakened, not strengthened, by such unilateral moves; and this plan would lead us away from peace, not closer to peace.

Unilateral Israeli action to re-draw the map of settlement in Judea and Samaria will only encourage Palestinian maximalism. The Palestinians will learn to sit tight and remain intransigent, compromising on no issue, and simply wait for Israelis to tear themselves down and out of the West Bank completely.

But countering the quixotic “constructive unilateralism” platform is not the focus of this column. My focus, and the more relevant question, is: Why would Netanyahu be moving in this direction?

The answer lies mainly in domestic politics. Netanyahu has no other national agenda item to sustain his prime ministership. He needs a new message that will reposition him as a leader in the public mind, and the Palestinian issue is all he’s got to work with.

The lead on economic and social matters has been grabbed by Lapid and Bennett. There’s little Netanyahu can do about the hot situation in Syria or Iran. His job is to react wisely and cautiously to developments on these fronts, not lead Israel into confrontation.

Moreover, a plan for unilateral Israeli withdrawal of sorts would blow the Lapid-Bennett alliance out of the water – something which is Netanyahu’s highest political priority. The path to prying Brother Lapid away from Brother Bennett runs through Ramallah.

Netanyahu is also furious with the Religious Zionist community for catapulting, as he sees it, arch hardliners who are thorns in Netanyahu’s side to the top of the Likud slate, and then “abandoning” the Likud in the recent elections in favor of Bayit Yehudi. Lately, I sense a vindictive streak in Netanyahu’s attitude to the settlement community, and this, I fear, also plays into contemplation of a move against settlements.

With Bennett forced out of government and Lapid imprisoned inside it, Netanyahu could then move to bring the Labor party and/or the Haredi parties into his coalition – all of whom would readily back unilateral withdrawals in the West Bank (in exchange for sufficient amounts of budget allocations and patronage appointments).

In the process, Shelley Yachimovich would ward off serious challenges within her party to her leadership. Haredi leaders would wreak their revenge on Bennett and the national religious public for pushing the Ultra-Orthodox out of cabinet and threatening to draft yeshiva boys.

And Netanyahu would bask in the glow of praise of Washington and Tel Aviv elites. Lately it seems that Netanyahu cares more about his global reputation than the opinions of Likud rank and file.

It’s strange to hear Netanyahu adopting the terminology of the Zionist left, warning, as he has done several times recently, about the danger of a bi-national state and the perils of international isolation. This tells me that he is under much more pressure than is evident to the public eye, and suggests to me that he is planning a surprise unilateral move. 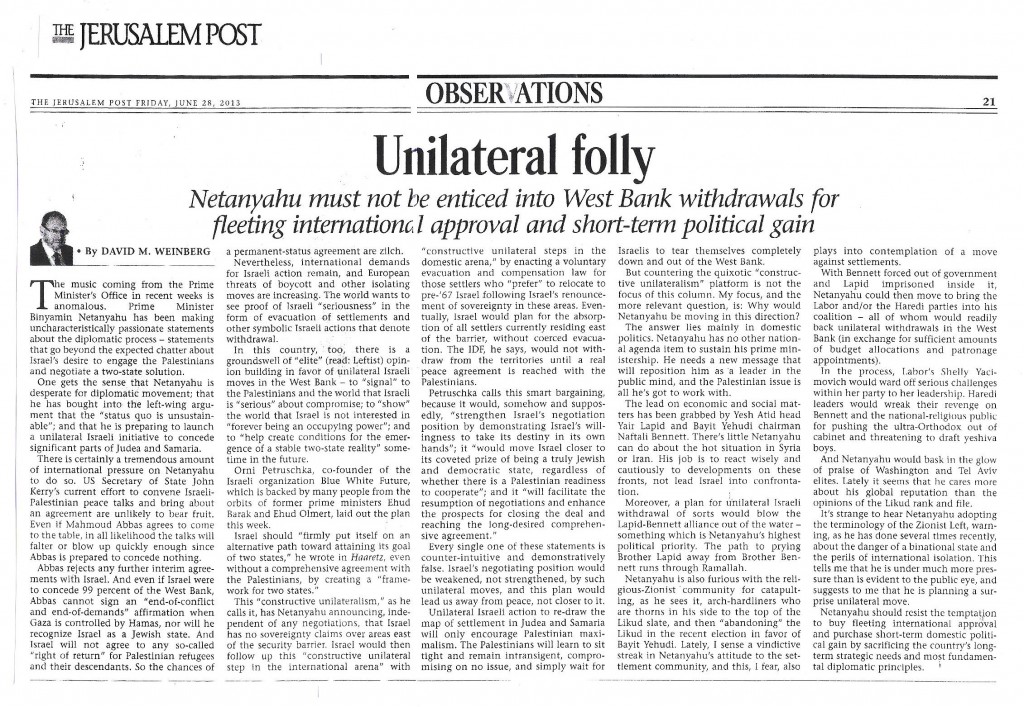