Israel is the legitimate expression of an indigenous Middle Eastern people; of Jews from Arab countries with a long history in the Middle East – who were ethnically-cleansed in the twentieth century, both prior to and mostly after the establishment of the State of Israel in 1948. In fact, 50 percent of the Jewish citizenry of today’s Israel descends from Jewish refugees from Arab countries.

Last month, Ottawa once again took the international lead in raising an issue important to Israel and Middle East peace. The Harper government initiated hearings on the matter of Jewish refugees from Arab countries in the Canadian parliament.

The hearings are part of a new push by Jewish groups (including Canada’s Center for Israel and Jewish Affairs, which I represent in Israel, and the World Jewish Congress) to highlight the plight of the Jewish refugees in the context of the Israeli-Palestinian conflict. The issue is important because it highlights the justice of Israel as the legitimate expression of an indigenous Middle Eastern people.

Shimon Koffler Fogel, CEO of the Center for Israel and Jewish Affairs, told the Canadian House of Commons Standing Committee on Foreign Affairs and International Development that Canada should officially recognize the persecution and displacement of over 850,000 Jews from the Middle East and North Africa. “Much of the Arab-Israeli peace process is about validation, of the legitimacy of Israel as a Jewish state and the recognition of the Palestinians as a people,” he said. “Redress for Jews displaced from Arab countries is another example of this, and needs to be included for true and lasting peace to be achieved.”

Fogel noted that “Achieving peace in the Middle East is not a zero-sum game. The rights and claims of one group need not come at the expense of or displace those of the other. And thus, the purpose of incorporating the historic claims of Jewish refugees from Arab countries is not to diminish or compete with the claims of Palestinian refugees. The inclusion of the issue of Jewish refugees is meant to complete, not revise, the historical record.”

As gavel-holder of the multilateral refugee working group (a moribund product of the 1991 Madrid Peace Conference), Canada is uniquely placed to raise the profile of the Jewish refugee issue and to ensure that it is given the fair consideration it merits.

The initiative in Canada needs to be repeated everywhere. In fact, there is a bill pending introduction in the US Congress which will require the State Department to report annually on what it has done to advance the Jewish refugee issue.

Why is this issue so important? Because it establishes that Israel is not a “foreign implant” in the Middle East; that Israel is not a mere by-product of the Nazi Holocaust and of European war guilt. Rather, some 50 percent of the Jewish citizenry of today’s Israel descends from Jewish refugees from Arab countries; Jews who lived in Middle East communities that stretch back up to 3,000 years.

This levels the playing field in international debate over the Israeli-Palestinian conflict. It makes it clear that Israel deserves and demands justice just as much as the Palestinians do, if not more so. 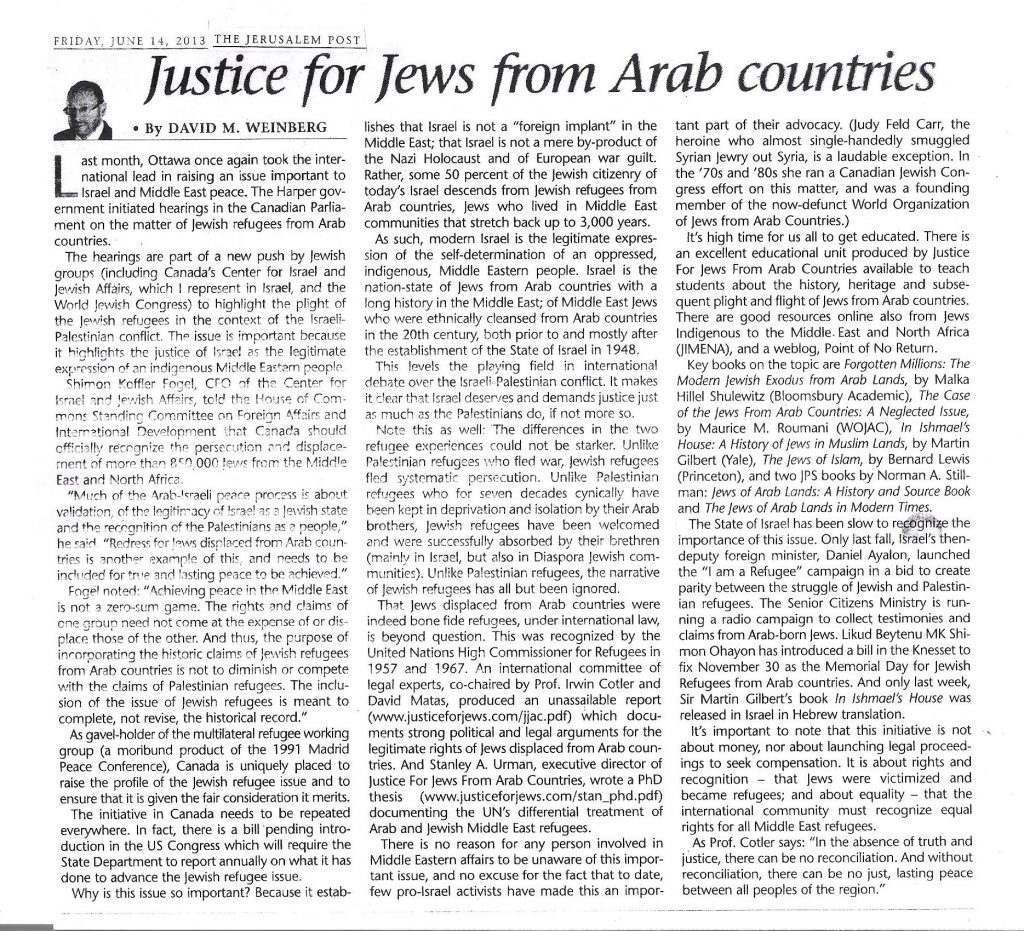 The fact that Jews displaced from Arab countries were indeed bone fide refugees, under international law, is beyond question. This was recognized by the United Nations High Commissioner for Refugees in 1957 and 1967. An international committee of legal experts, co-chaired by Prof. Irwin Cotler and David Matas, produced an unassailable report [6] which documents strong political and legal arguments for the legitimate rights of Jews displaced from Arab countries. And Stanley A. Urman, executive director of Justice For Jews From Arab Countries [7], wrote a Ph.D. thesis [8] documenting the U.N.’s differential treatment of Arab and Jewish Middle East refugees.

There is no reason for any person involved in Middle Eastern affairs to be unaware of this important issue, and no excuse for the fact that to-date few pro-Israel activists have made this an important part of their advocacy. (Judy Feld Carr, the heroine who almost single-handedly smuggled Syrian Jewry out Syria, is a laudable exception. In the 70s and 80s she ran a Canadian Jewish Congress effort on this matter, and was a founding member of the now-defunct World Organization of Jews from Arab Countries).

It’s high time for us all to get educated. There is an excellent educational unit [9] produced by Justice For Jews From Arab Countries [7] available to teach students about the history, heritage and subsequent plight and flight of Jews from Arab countries. There are good resources online also from Jews Indigenous to the Middle East and North Africa (JIMENA) [10], and a weblog, Point of No Return [11].

Key books on the topic are Forgotten Millions: The Modern Jewish Exodus from Arab Lands, by Malka Hillel Shulewitz (Bloomsbury Academic), The Case of the Jews From Arab Countries: A Neglected Issue, by Maurice M. Roumani (WOJAC), In Ishmael’s House: A History of Jews in Muslim Lands, by Martin Gilbert (Yale), The Jews of Islam, by Bernard Lewis (Princeton), and two JPS books by Norman A. Stillman: Jews of Arab Lands: A History and Source Book, and The Jews of Arab Lands in Modern Times.

The State of Israel has been slow to recognize the importance of this issue. Only last fall, Israel’s then-deputy foreign minister, Daniel Ayalon, launched the “I am a Refugee” campaign in a bid to create parity between the struggle of Jewish and Palestinian refugees. The Israeli Ministry for Senior Citizens is currently running a radio campaign to collect testimonies and claims from Arab-born Jews. A bill has been tabled in the Knesset by Likud Beiteinu MK Shimon Ohayon to fix November 30 as the Memorial Day for Jewish Refugees from Arab countries. And only last week, Sir Martin Gilbert’s book In Ishmael’s House was released in Israel in Hebrew translation.

It’s important to note that this initiative is not about money, nor about launching legal proceedings to seek compensation. It is about rights and recognition – that Jews were victimized and became refugees; and about equality – that the international community must recognize equal rights for all Middle East refugees.