A week with Norwegian friends of Israel taught me how to best present Israel’s case. Israel wins when you speak about justice for Israel; not when you merely proclaim Israel’s desire for peace, talk-up its willingness to compromise, and declare its right to defend itself.

Published in The Jerusalem Post and Israel Hayom, Friday, June 7, 2013. 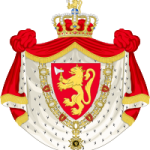 The dramatic mountains and expansive fjords of Norway do not immediately jump to mind as the place to learn about Israel’s diplomatic strengths and weaknesses. Yet the week I just spent with Norwegian friends of Israel taught me how the justice of Israel’s cause can be most effectively presented.

In short, Israel wins when you speak about justice for Israel; not when you merely proclaim Israel’s desire for peace, talk-up its willingness to compromise, and declare its right to defend itself.

Norway is a wealthy country with vast expanses of Divine beauty, but it is a miserly environment for Israel with little sympathy in the halls of government for the Jewish state’s goals and challenges. Norway is one of the top funders of the Palestinian Authority, and last fall it cheerfully supported UN recognition of the PA as an independent state. Perhaps all that North Sea oil has gone to the heads of Norwegian leaders.

Nevertheless, it was heartwarming and inspiring to discover that Israel has broad grassroots support in Norway, and that friends of Israel have organized themselves into an effective and increasingly respected lobby. The group, Med Israel for Fred, or “With Israel for Peace,” is led by Morten Rasmussen, Gabriel Edland, and Conrad Myrland.

I met dozens of Norwegians who stand on street corners handing out flyers about Israel, who write learned op-ed articles in defense of Israel in the mostly-hostile Norwegian press, and who lobby parliamentarians and government ministers in support of Israel. MIFF boasts almost 7,000 paid members, and it engages more people on Facebook than some of the major Norwegian political parties. The International Christian Embassy in Jerusalem also has thousands of members in Norway too. Relative to the size of Norway’s population (only five million people), these are significant pro-Israel numbers.

Every single person I met through MIFF had been to Israel several times, in some cases more than 30 times. Many had worked on a kibbutz or volunteered in the army. Some spoke basic Hebrew, while quite a few others had served in the Norwegian military contingents in Lebanon or the Golan (and in the process had come to admire Israel). Most were subscribers to The Jerusalem Post. They all were outraged by de rigueur European criticism of Israel and unfriendly European media coverage of Israel.

Believe it or not, Israel really does have many devoted friends out there! I was so impressed.

I was even more impressed by the sophistication of MIFF’s approach to hasbara.

Norwegian MIFF activists have learned that it is simply not enough to explain Israel’s security dilemmas or revisit Israel’s diplomatic generosity towards the Palestinians. What’s needed is a much more basic restatement of Israel’s cause and purpose: Israel as a grand historic reunion of people and land, as a shelter for the Jewish People, and as a just and moral actor in the medieval and violent Arab Middle East. 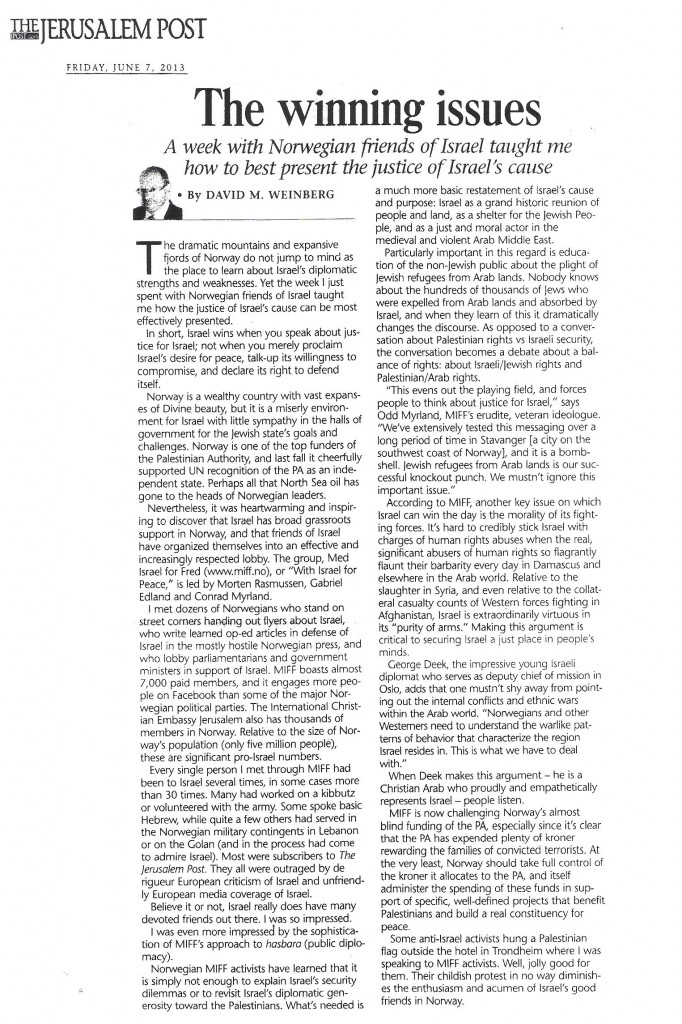 Particularly important in this regard is education of the non-Jewish public about the plight of Jewish refugees from Arab lands. Nobody knows about the hundreds of thousands of Jews who were expelled from Arab lands and absorbed by Israel, and when they learn of this it dramatically changes the discourse! As opposed to a conversation about Palestinian rights vs. Israeli security, the conversation becomes a debate about a balance of rights: about Israeli/Jewish rights and Palestinian/Arab rights.

“This evens out the playing field, and forces people to think about justice for Israel,” says Odd Myrland, MIFF’s erudite, veteran ideologue. “We’ve extensively tested this messaging over a long period of time in Stavanger (a city on the southwest coast of Norway), and it is a bombshell. Jewish refugees from Arab lands is our successful knockout punch. We mustn’t ignore this important issue.”

According to MIFF, another key issue on which Israel can win the day is the morality of its fighting forces. It’s hard to credibly stick Israel with charges of human rights abuses when the real, significant abusers of human rights so flagrantly flaunt their barbarity every day in Damascus and elsewhere in the Arab world. Relative to the slaughter in Syria, and even relative to the collateral casualty counts of Western forces fighting in Afghanistan, Israel is extraordinarily virtuous in its ‘purity of arms.’ Making this argument is critical to securing Israel a just place in people’s minds.

George Deek, the impressive young Israeli diplomat who serves as deputy chief of mission in Oslo, adds that one mustn’t shy away from pointing out the internal conflicts and ethnic wars within the Arab world. “Norwegians and other Westerners need to understand the warlike patterns of behavior that characterize the region Israel resides in. This is what we have to deal with.” When Deek makes this argument – he is a Christian Arab who proudly and empathetically represents Israel – people listen!

MIFF is now challenging Norway’s almost blind funding of the PA, especially since it’s clear that the PA has expended plenty of kroner rewarding the families of convicted terrorists. At the very least, Norway should take full control of the kroner it allocates to the PA, and itself administer the spending of these funds in support of specific, well-defined projects that benefit Palestinians and build a real constituency for peace.

Some anti-Israel activists hung a Palestinian flag outside the hotel in Trondheim where I was speaking to MIFF activists. Well, jolly good for them. Their childish protest in no way diminishes the enthusiasm and acumen of Israel’s good friends in Norway.

PrevPreviousThe return of unilateralism?
NextJustice for Jews from Arab CountriesNext