The political Left is impatient. The same people who once sold us Yasser Arafat and Mahmoud Abbas as peace partners are now telling us that peace is impossible yet the existing situation is unacceptable, and therefore the unilateral route is the only remaining course of action for Israel. Netanyahu should make it clear that Israel is not headed towards another imprudent “disengagement” from the territories. 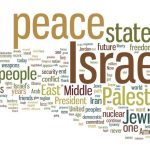 You would think that following Israel’s ruinous unilateral withdrawals from Lebanon and Gaza, unilateralism would be dead in the water. For the majority of Israelis and Israeli strategic thinkers, I believe that this remains the case.

But the political Left is impatient. The same people who once sold us Yasser Arafat and Mahmoud Abbas as peace partners are now telling us that peace is impossible yet the existing situation is unacceptable, and therefore the unilateral route is the only remaining course of action for Israel.

In fact, there is a groundswell of “elite” (read: Leftist) opinion building in favor of unilateral Israeli withdrawal in the West Bank. I sense that Prime Minister Netanyahu is being pulled in this direction.

In current parlance, unilateralism means to “make peace without (Palestinian) partners;” to tear down settlements in the distant reaches of the West Bank in order to “signal” to the Palestinians that the Netanyahu government is “serious” about compromise; to “show” the world that Israel is not interested in “forever being an occupying power”; to “act boldly to set Israel’s borders without being hostage to the Palestinians,” and so forth.

Over the past year, Ehud Barak and Shaul Mofaz, both former defense ministers, have touted unilateral Israeli action. “We are on borrowed time,” Barak said in a June 2012 speech to the Institute for National Security Studies (INSS). “We will reach a wall, and we’ll pay the price. If it isn’t possible to reach a permanent agreement with the Palestinians, we must consider an interim arrangement or even a unilateral move.”

INSS director Maj. Gen. (res.) Amos Yadlin backed up Barak with an “academic study,” which after reviewing all negotiation possibilities, reached the conclusion that no agreement can be reached with the Palestinians and therefore Israel “should go forward (with withdrawals) without depending on the Palestinians.”

At a more recent INSS conference, Barak’s former bureau chief, Gilad Sher, presented a team report entitled “The Palestinian Issue: Toward a Reality of Two States” which also advocated unilateral Israeli withdrawal. Aware of the disastrous security consequences of the 2005 unilateral withdrawal from Gaza, the INSS team did not suggest a military withdrawal from Judea and Samaria but only a civilian one. In other words, many Israelis living beyond the 1949 armistice line would be deported, but the IDF would retain its presence beyond that line.

Or to put it another way, the settlers would shafted, even though the military “occupation” of the West Bank would continue and no peace would ensue. 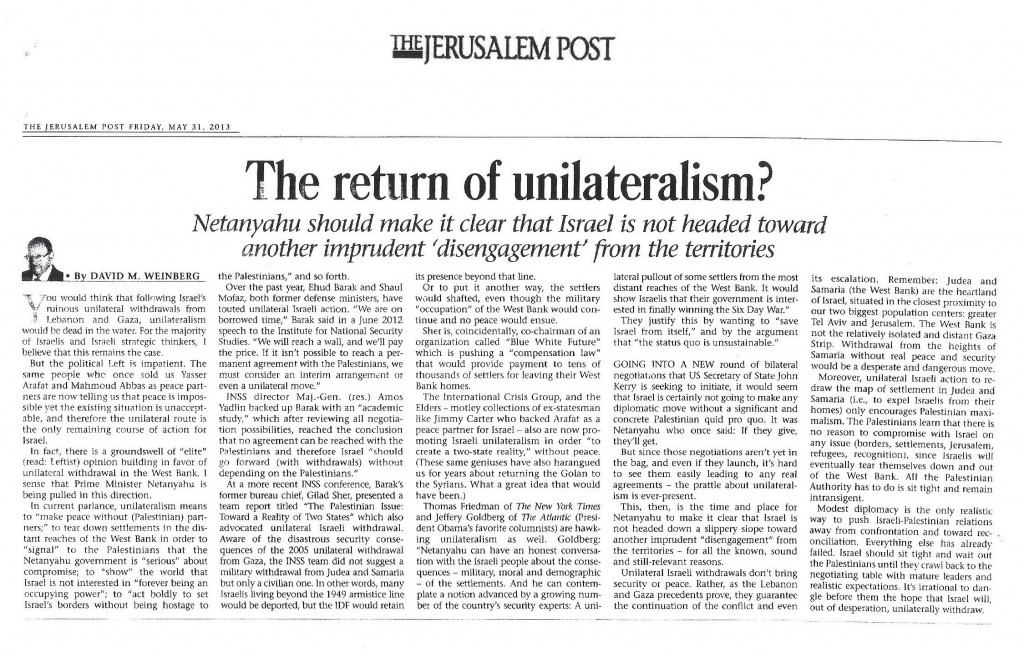 Sher is, coincidentally, co-chairman of an organization called “Blue White Future” which is pushing a “compensation law” that would provide payment to tens of thousands of settlers for leaving their West Bank homes.

The “International Crisis Group,” and the “Elders” – motley collections of ex-statesman like Jimmy Carter who backed Arafat as a peace partner for Israel – also are now promoting Israeli unilateralism in order “to create a two-state reality,” without peace. (These same geniuses have also harangued us for years about returning the Golan to the Syrians. What a great idea that would have been).

Thomas Friedman of The New York Times and Jeffery Goldberg of The Atlantic (President Obama’s favorite columnists) are hawking unilateralism, as well. Goldberg: “Netanyahu can have an honest conversation with the Israeli people about the consequences – military, moral and demographic – of the settlements. And he can contemplate a notion advanced by a growing number of the country’s security experts: a unilateral pullout of some settlers from the most distant reaches of the West Bank. It would show Israelis that their government is interested in finally winning the Six-Day War.”

They justify this by wanting to “save Israel from itself,” and by the argument that “the status quo is unsustainable.”

GOING INTO A NEW round of bilateral negotiations that US Secretary of State John Kerry is seeking to initiate, it would seem that Israel is certainly not going to make any diplomatic move without a significant and concrete Palestinian quid pro quo. It was Netanyahu who once said: If they give, they’ll get.

But since those new negotiations aren’t yet in the bag, and even if they launch, it’s hard to see them easily leading to any real agreements – the prattle about unilateralism is ever-present.

This, then, is the time and place for Netanyahu to make it clear that Israel is not headed down a slippery slope towards another imprudent “disengagement” from the territories – for all the known, sound, and still-relevant reasons.

Unilateral Israeli withdrawals don’t bring security or peace. Rather, as the Lebanon and Gaza precedents prove, they guarantee the continuation of the conflict and even its escalation. Remember: Judea and Samaria (the West Bank) are the heartland of Israel, situated in the closest proximity to our two biggest population centers: greater Tel Aviv and Jerusalem. The West Bank is not the relatively isolated and distant Gaza Strip. Withdrawal from the heights of Samaria without real peace and security would be a desperate and dangerous move.

Moreover, unilateral Israeli action to re-draw the map of settlement in Judea and Samaria (i.e., to expel Israelis from their homes), only encourages Palestinian maximalism. The Palestinians learn that there is no reason to compromise with Israel on any issue (borders, settlements, Jerusalem, refugees, recognition), since Israelis will eventually tear themselves down and out of the West Bank. All the Palestinian Authority has to do is sit tight and remain intransigent.

Modest diplomacy is the only realistic way to push Israeli-Palestinian relations away from confrontation and towards reconciliation. Everything else has already failed. Israel should sit tight and wait out the Palestinians until they crawl back to the negotiating table with mature leaders and realistic expectations. It’s irrational to dangle before them the hope that Israel will, out of desperation, unilaterally withdraw.