The soft signals and acquiescent music coming from prominent US think-tanks are increasingly hard to miss. Washington wags are seeding the American diplomatic and political discourse with messages of capitulation to Iran, and paving the way for a climb-down from Obama’s declared policy of halting Iran’s nuclear drive.

A new Washington report headlined by former US under secretary of state for political affairs Thomas R. Pickering argues that America should end its confrontation with Iran over Teheran’s nuclear weapons drive.

Pickering and his senior “Iran Project” colleagues want President Obama to altogether drop sanctions and covert action against Iran. They assert that sanctions are only “contributing to an increase in repression and corruption within Iran,” and alas “may be sowing the seeds of long-term alienation between the Iranian people and the United States.”

Pickering’s call for American capitulation to Iran is now being echoed across the Washington wag world. Numerous think-tanks are seeding the American diplomatic and political discourse with similar messages, and paving the way for a climb-down from Obama’s declared policy of preventing (and not merely containing) Iran’s obtainment of a nuclear weapon.

This week, the Center for a New American Security, a think-tank closely affiliated with the Obama administration, made it clear which way the Washington winds are blowing. Its new study, “The Challenges of Containing a Nuclear-Armed Iran,” was primarily authored by former Obama administration deputy assistant secretary of defense for the Middle East Prof. Colin H. Kahl. He outlines “a comprehensive framework to manage and mitigate the consequences of a nuclear-armed Iran.” In other words, stopping the Iranian nuclear effort is already a passé discussion.

Last month, an Atlantic Council task force (which Chuck Hagel co-chaired until he was appointed Secretary of Defense), similarly released a report that called for Washington to “lessen the chances for war through reinvigorated diplomacy that offers Iran a realistic and face-saving way out of the nuclear standoff.” That’s diplomatic-speak for a containment strategy.

To top it all off, the Defense Department-allied Rand Corporation concluded this week that a nuclear-armed Iran would not pose a fundamental threat to the United States and its regional allies. In “Iran After the Bomb: How Would a Nuclear-Armed Tehran Behave?”, Rand’s experts assert that the acquisition by Tehran of nuclear weapons  would above all be intended to deter an attack by hostile powers, presumably including Israel and the United States, rather than for aggressive purposes. “An Iran with nukes will still be a declining power,” they say. “Iran does not have territorial ambitions and does not seek to invade, conquer, or occupy other nations.”

Similarly, Paul Pillar, a veteran CIA analyst who served as the National Intelligence Officer for the Middle East and South Asia, has published a lengthy essay in The Washington Monthly entitled “We Can Live With a Nuclear Iran: Fears of a Bomb in Tehran’s Hands Are Overhyped, and a War to Prevent It Would Be a Disaster.”

And finally, the leading realist theorist of the past century, Prof. Kenneth N. Waltz of Columbia University’s Saltzman Institute of War and Peace Studies (who died last week), actually argued in his last published article that Iran should get the bomb! It would create “a more durable balance of military power in the Middle East,” he wrote in the establishment journal Foreign Affairs. 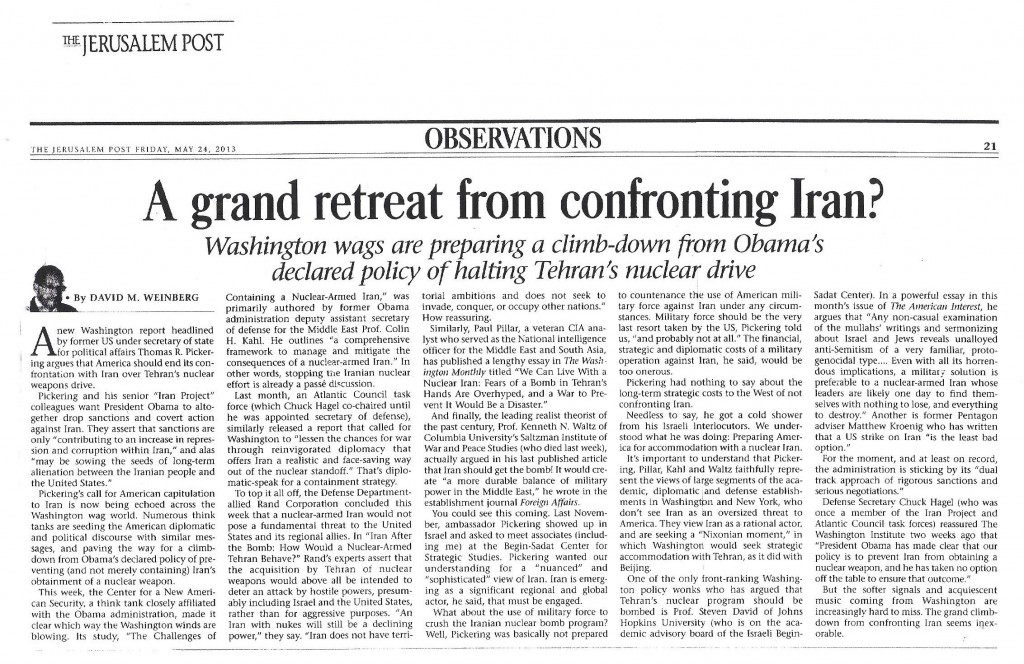 You could see this coming. Last November, Ambassador Pickering showed up in Israel and asked to meet associates (including me) at the Begin-Sadat Center for Strategic Studies. Pickering wanted our understanding for a “nuanced” and “sophisticated” view of Iran. Iran is emerging as a significant regional and global actor, he said, that must be engaged.

What about the use of military force to crush the Iranian nuclear bomb program? Well, Pickering was basically not prepared to countenance the use of American military force against Iran under any circumstances. Military force should be the very last resort taken by the US, Pickering told us, “and probably not at all.” The financial, strategic and diplomatic costs of a military operation against Iran, he said, would be too onerous.

Pickering had nothing to say about the long-term strategic costs to the West of not confronting Iran.

Needless to say, Pickering got a cold shower from his Israeli interlocutors. We understood what he was doing: Preparing America for accommodation with a nuclear Iran.

It’s important to understand that Pickering, Pillar, Kahl and Waltz faithfully represent the views of large segments of the academic, diplomatic and defense establishments in Washington and New York, who don’t see Iran as an oversized threat to America. They view Iran as a rational actor, and are seeking a “Nixonian moment,” in which Washington would seek strategic accommodation with Tehran, as it did with Beijing.

One of the only front-ranking Washington policy wonks who has argued that Teheran’s nuclear program should be bombed is Prof. Steven David of Johns Hopkins University (who is on the academic advisory board of the Israeli Begin-Sadat Center). In a powerful essay in this month’s issue of The American Interest, he argues that “Any non-casual examination of the mullahs’ writings and sermonizing about Israel and Jews reveals unalloyed anti-Semitism of a very familiar, proto-genocidal type…. Even with all its horrendous implications, a military solution is preferable to a nuclear-armed Iran whose leaders are likely one day to find themselves with nothing to lose, and everything to destroy.”

Another is former Pentagon advisor Matthew Kroenig who has written that a US strike on Iran “is the least bad option.”

For the moment, and at least on record, the Administration is sticking by its “dual track approach of rigorous sanctions and serious negotiations.” Defense Secretary Chuck Hagel (who was once a member of the Iran Project and Atlantic Council task forces) reassured The Washington Institute two weeks ago that “President Obama has made clear that our policy is to prevent Iran from obtaining a nuclear weapon, and he has taken no option off the table to ensure that outcome.”

But the softer signals and acquiescent music coming from Washington are increasingly hard to miss. The grand climb-down from confronting Iran seems inexorable.