The Begin-Sadat Center for Strategic Studies has been consistently ahead of the curve. 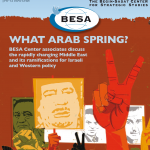 Prime Minister Benjamin Netanyahu said this week that Israel needs to rethink its overall security needs in the wake of the (clearly mislabeled) “Arab Spring.” He noted that Islamists were on the march, and that Israel retains the right to act in order to interdict the transfer of strategic weapons to radical forces in the region.

Indeed, the times call for new strategic thinking. Consistently ahead of the curve has been the Begin-Sadat Center for Strategic Studies [4] (the BESA Center, where I direct public affairs). Time and again, its experts have looked over-the-horizon and produced out-of-the-box policy recommendations, even when their conclusions were not always politically correct or well-received by mainstream pundits. Netanyahu has definitely noticed, and it’s no accident that he chose the BESA Center as the venue for his major foreign policy speech back in June 2009.

Consider, for example, the peace process with the Palestinians. There is definitely a need today for new diplomatic paradigms, since the near-term likelihood of a comprehensive peace deal that neatly divides the West Bank and ends all claims is minimal.

Eiland creatively looks at diplomatic alternatives that could transform the current deadlock from a zero-sum situation to a win-win scenario. He suggests three- or four-way land swaps involving Egypt and Jordan; shared sovereignty in the West Bank; renewed consideration of a Palestinian-Jordanian federation; and perhaps a combination of all these approaches.

Diplomats and policymakers are now going back to bone-up on these path-breaking publications in search of new thinking that can move beyond the stalemate in Palestinian-Israeli relations to which Oslo has led.

As far back as 2005, Inbar and colleagues warned [7] that diplomatic efforts and economic sanctions alone would fail to halt Iran’s nuclear program. Only a credible threat to use force, or even the actual use of force, they predicted, would serve to deter the Iranians. Look where we are today.

Following up on this, the doyen of Israeli strategists, Prof. Yehezkel Dror, argued in a comprehensive Begin-Sadat Center study [8] that “Israel must destroy Iranian nuclear facilities and simultaneously launch a comprehensive Middle East peace initiative.” A violent Iranian reaction is to be expected, he wrote, “but its maximum costs to Israel, the US, and all of the Middle East are much smaller than those stemming from Iranian possession of nuclear weapons.”

Back in 2006, Professor Efraim Karsh published a little-noticed Begin-Sadat Center study called “The Tragedy of Arab Imperialism [9].” His prescient prediction was that Arab pan-nationalism and nationalist dictatorship structures were paper-thin and bound to fail. He also foresaw the radical Islamist menace lurking underneath. “Islam remains the strongest identity framework in Egyptian society in particular, and in Arab society generally,” Karsh warned. “The Arab national dictatorships that were layered over this basic Islamic identity for the past 80 years were but a thin veneer of repression. With the fall of these dictatorships, what remains are the core Islamic underpinnings of society, and these are now coming to the fore. Consequently, no democratic structures, processes or values are likely to emerge in the Arab world for many generations.” 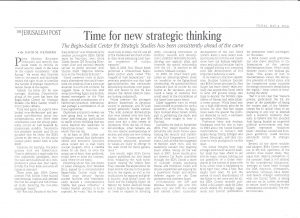 Last month, eight BESA Center experts published the first Israeli book evaluating the Arab earthquakes rocking the Middle East. They consider the implications for Israel and its chances to live peacefully in the region, as well as the implications for regional and global security. Arab Spring? Israel, the World and the Changing Region [11] (in Hebrew by Yediot Ahronot books and in English by Routledge) calls on Israel to expand its standing army, increasing investment in military research and development, establish defensible borders, develop new regional allies, and intensify the special relationship with the US – in reaction to the tectonic Mideast changes.

In 2009, Dr. Ehud Eilam published an almost-prophetic study on instability in the Egypt-Israel relationship [12]. He questioned Hosni Mubarak’s plan to anoint his son Gamal as his successor, and surveyed a range of scenarios that could result in the cancellation of the Egypt-Israel peace treaty.

Eilam suggested ways in which Israel needed to prepare for such a possibility. At the time, the Egyptians howled about Israeli chutzpa in publishing the study, and official Israel sought to bury it. Too bad.

Just before he died in September 2010, Professor Joseph Kostiner published the only study I know questioning the security and stability of the Gulf Cooperation Council states [13]. Look at what has happened in Bahrain since then, and the leadership vacuum now plaguing Saudi Arabia…

Going all the way back to 2007, Arrow missile project director Uzi Rubin published through the BESA Center a series of in-depth studies analyzing Hamas and Hezbollah rocket and missile capabilities [14] and arguing for a significant Israeli anti-missile defense regime for the Gaza perimeter and northern Israel.

Unfortunately, the Israel Defense Forces and Defense Ministry got into this game very late with the rushed and limited (albeit successful) development of the Iron Dome system. Rubin’s most recent studies evaluate Iron Dome and clearly show how the defense establishment and political echelon had to be dragged kicking and screaming into late development of this important defensive system.

As for Hamas’s offensive capabilities, Hudson Institute founder and BESA Center associate Dr. Max Singer has more clearly-than-anybody-else argued [15] that Israel needs to send IDF ground forces into Gaza to destroy the military capabilities of Hamas and other Islamic terror groups. While Israel may pay a high diplomatic price for its actions, he says that the longer Israel waits the greater the political obstacles to such a necessary operation will become.

Professors Inbar and Amikam Nachmani were the first to warn in 2003 about the hostile Islamist machinations of Turkey’s AKP leaders Recep Tayyip Erdogan and Ahmet Davutoglu, and they continue to write prodigiously on this issue.

The Golan Heights have high strategic and moral value for Israel, but Israel has been afraid to say this for years, instead holding out the possibility of a Golan withdrawal in the context of peace with Syria. Given what is happening in Syria right now, what a folly that might have been!

In order to put the notion of Israeli abandonment of the Golan to rest once and for all, the BESA Center recently published a full-length study by Inbar which details the strategic, legal, moral and historic justifications for permanent Israeli sovereignty on the Golan [16].

A BESA Center study [17] published last year draws attention to the Islamicization of the eastern Mediterranean basin, which could threaten Israel’s new mid-sea gas fields. “The access of Iran to Mediterranean waters, the disruptive potential of failed states, and the competition across countries for energy resources is destabilizing the region,” writes Inbar in introducing the study. “But it is not clear that Western powers, particularly the U.S., are aware of the possibility of losing the eastern part of the Mediterranean Sea to radical Islam or are preparing in any way to forestall such a scenario. Foolishly, they seem to believe that the so-called Arab Spring heralds an improved political environment and that Turkey represents ‘moderate Islam.’ American naiveté and European gullibility could become extremely costly in strategic terms.”

Beyond all the above troubles and dangers, BESA Center experts are, in the end, optimistic. In the center’s most recent study, they argue that, despite perceptions to the contrary, Israel is not isolated [18] in the international community. Attempts to harm Israel through the BDS (boycotts, divestments, sanctions) campaign have failed. And Israel’s strategic relationship with the United States is strong and can yet be further developed in order to ensure Israel’s standing in the international community, the center concludes.