Bayit Yehudi is making a wreckage of the Chief Rabbinate race by failing to back Rabbi David Stav. Might Elazar Stern’s legislative initiative to revamp the electoral college save the day?

Published in The Jerusalem Post and Israel Hayom, April 26, 2013.

At first, it seemed so simple. After 20 years of Haredi domination of the Rabbinate, Israel’s new government had a chance to rehabilitate the “Rabbinocracy,” curb its radicalization, and reconnect it to Israeli society.

There was a good chance to elect a staunchly and proudly Zionist Chief Rabbi, and there were several excellent candidates for the eminent post.

There was even a chance to elect a Chief Rabbi with real executive experience at making changes and at revamping stultified rabbinic bureaucracies, who had a concrete and realistic plan to do so, and who even had the support of major secular political factions and many elements in Diaspora Jewry.

His name is Rabbi David Stav, chairman of the bold, Modern Orthodox, Tzohar rabbinical association. It should have been a slam dunk. It still can be.

But alas, the Bayit Yehudi party, which is the key player, seems to be bungling it. It has so far failed to get behind Rabbi Stav. Instead, the party is succumbing to the well-intentioned but misguided machinations of Rabbi Chaim Druckman and other (small “c”) conservative rabbis who want to re-engineer the election process in order to select somebody else.

Unfortunately, it appears likely that all the tinkering with the process is going to leave Bayit Yehudi, Religious Zionism, and the secular Zionist public high and dry. In its absurdly complicated and incautious attempts to re-jigger the election process, Bayit Yehudi is going to fail, I’m afraid, in electing its preferred candidate (apparently, Ramat Gan Chief Rabbi Yaakov Ariel), and instead see a Haredi rabbi re-elected.

You simply wouldn’t believe how unreasonably complicated this race is getting. At the moment, there are tricky legislative initiatives underway to raise the age limit for the post (in order to allow Rabbi Ariel to stand for election), to cancel the one-term job limit (in order to allow Sephardic Chief Rabbi Amar to stand for reelection), and more.

There is even a political deal cooking to tie the election of the Chief Rabbis to the election of a new President of the state. Avigdor Lieberman is said to have offered Bayit Yehudi his faction’s support for legislation that would smooth the way for rabbis Ariel and Amar – if Bayit Yehudi agrees to back Lieberman’s favored candidate for President (that is, David Levy) when Shimon Peres retires next year. 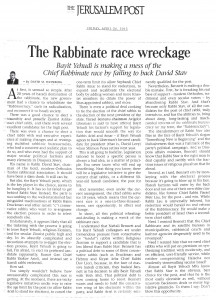 This is all going to backfire. Legislation tailored to boost a specific person is always a bad idea, as a matter of principle. You never know who will end up benefiting  Next thing you know, there will be a legislative initiative to give the current Chief Rabbis, or a different 50-year-old Haredi candidate, the post for life!

And remember, even under the current arrangement, the Chief Rabbis serve for ten years. Which means that the current race is a one-in-three-Knesset-terms, rare opportunity, to effect real change.

In short, all this political wheeling-and-dealing is making a wreckage of the rabbinate race.

I understand that Naftali Bennett and his Bayit Yehudi colleagues are under tremendous pressure from conservative (or “Hardal”) rabbis within Religious Zionism to support a candidate that is less liberal than Rabbi Stav. Bennett has a political debt to some of these conservative rabbis (such as Rabbis Druckman and Lior), because, in the face of massive Haredi criticism, they backed up Bennett in his decision to ally Bayit Yehudi with Yesh Atid. That political debt is now coming home to roost. Bennett wants and needs to hold the conservative wing of his electorate within the party, and Rabbi Ariel is certainly eminently qualified for the post.

Nevertheless, Bennett is making a double mistake. Firstly, he is forsaking his real base of support – modern Orthodox, traditional and even secular voters – by abandoning Rabbi Stav. And that’s because only Rabbi Stav, of all the candidates for the post of Chief Rabbi, truly intends to, and has the abilities to bring-about deep, long-lasting and much-needed reforms of the Rabbinate bureaucracy (or my term, “Rabbinocracy”).

The abandonment of Rabbi Stav also flies in the face of Bayit Yehudi’s slogan “Something New is Beginning” and the inclusiveness that was a hallmark of the party’s political campaign. And as Minister of Diaspora Affairs, Bennett should know that Rabbi Stav is the right man to stick-handle the fractious issues of religious pluralism that lie ahead.

Secondly, as I said, Bennett errs in monkeying with the electoral process because it’s going to blow up in his face. Haredi factions will enter by the back door and run one of their own elder candidates, like former Chief Rabbi Yisrael Meir Lau, for the post – and win. While Rabbi Lau is universally beloved, his reelection heralds no real reform of the “Rabbinocracy.” He would make a better President of Israel than a second-term Chief Rabbi.

There is hope on the horizon. Elazar Stern MK (HaTnua) plans to introduce legislation to expand and re-calibrate the “college” that elects the Chief Rabbis by adding women, more IDF rabbis, and more Knesset members – in order to dilute the power of the Haredi rabbis that currently dominate the electoral body. Furthermore, Stern’s law would define a high bar for the post. Candidates would have to be formally qualified as both city rabbis and rabbinical court judges. This could successfully swing the vote towards Rabbi Stav, who meets all the criteria.

Almost all Bayit Yehudi MKs know that David Stav is the obvious, best choice for the post, and that he is the most easily-electable as well. To them I say: Don’t blow this opportunity.

PrevPreviousWho will give me a Sunday?
NextIs America moving to accommodation with Iran?Next