Reflections for Israel’s 65th Independence Day: Belief in the power of Jewish history, animated by ancient faith, explains much about Israel today. It explains our willingness to sacrifice so much for independence. It explains our drive to succeed in the arts and sciences and to share our advances with the world. It explains our attachment to Jerusalem. It explains why we sometimes stubbornly refuse to accept rational calculations of diplomatic cost and benefit politely impressed on us by well-meaning allies… Those who consider history only in temporal terms underestimate and misjudge Israel.

Press reviews of the state of this country on its Independence Day commonly miss the spiritual, meta-historic significance of Israel’s achievement. They tend to calculate a balance sheet of Israel’s successes and failures in defense, economy, democracy and peace-making, but fail to fathom the processes at work behind the curtain of current affairs.

It’s valid to apply temporal yardsticks of measurement to Israel, but such evaluations undershoot the deeper challenge: to understand the resurgence of Israel in grand historical terms; to discern the mystic movement, the Divine drama – if you will, at play. 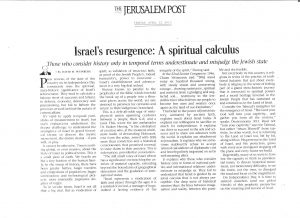 It cannot be otherwise. There is nothing global, or even massive, about the State of Israel in political terms. This is a small piece of earth. We Israelis are but a tiny fraction of the human family. In the sweep of history, there have been greater battles, larger transfers and emigrations of populations, bigger construction and technological projects, more eminently impressive displays of might.

So in secular terms, Israel is not all that big a deal. But as vindication of spirit, as validation of tenacious faith, as proof of the Jewish People’s – indeed humanity’s – power to overcome, Israel’s establishment and advancement is a very big deal indeed.

History knows no parallel to the prophecies of the Bible, which foretold the break-up of a people into a thousand pieces across the world, yet destined to persevere for centuries and return to their indigenous homeland.

This is a defy-all-odds saga of metaphysical union spanning centuries between a people, their G-d, and a land. This, wrote the late Ambassador Dr. Yaacov Herzog, “is the celebration of a nation who, at the moment of ultimate nadir, of devastating Holocaust, rose from the ashes, armed with little more than conviction and a historical consciousness that promised renewal, to stake claim to their ancestry. This is redemption, providential consolation.”

“The still small voice of Israel reborn has a significance overreaching the criterion of material capacity, extending beyond the boundaries of geographical dimension and the gradation of international status.”

“Israel represents a vindication of faith and prayer through the ages; it is a symbol of revival, a message of hope, indeed a lasting evidence of the integrity of the spirit.”

At the 22cd Zionist Congress in 1946, Chaim Weizman said: “(We) stand today six hundred thousand strong, with steady vision and unwavering courage…drawing sustenance, spiritual and material, from a grudging and neglected soil….testimony to the irresistible force which drives our people to become free men and women once again on the land of our forefathers.”

This belief in the power of Jewish history, animated by ancient faith, explains much about Israel today. It explains our willingness to sacrifice so much for independence. It explains our drive to succeed in the arts and sciences and to share our advances with the world. It explains our attachment to Jerusalem. It explains why we sometimes stubbornly refuse to accept rational calculations of diplomatic cost and benefit politely impressed on us by well-meaning allies.

It explains why those who consider history only in terms of national politics and international relations underestimate or misjudge us. They fail to understand that Israel is guided by an astral calculus that is not always perceptible. Our deep sense of historical mission blurs the lines between imagination and reality, between the possible and the feasible.

Not everybody in this country is religious in terms of traditional Judaism practice. But just about everybody is religious in the sense of feeling part of a grand meta-historic journey that is connected to spiritual powers and a moral heritage invested in the Jewish People that has sustained us and returned us to the Land of Israel.

Consider the Talmud’s metaphor for the resurgence of Israel. “The Lord your God will turn your captivity…and gather you from all the nations,” speaks Deuteronomy 30:3. Read not ‘turn your captivity,’ says the Talmud, but rather ‘return Himself’ from captivity. In other words, G-d is returning to the land of Israel too, bit by bit, along with us. His presence in the Land of Israel, and His protection, grows with every new immigrant stepping off the plane and every new house we build.

Regrettably, many of us seem to have lost the capacity to think in providential terms: to discern historical movement, not momentary difficulty; to see the forest, not the trees; to disregard the mud and focus on the magnificent.

On Yom Haatzmaut, it is time to remind ourselves (and our global friends) of this prophetic perspective on the meaning and success of Israel.