A personal story for Yom Hashoah: About a kvitel, a little prayer note, that connects five generations of my family; from my great-grandfather, Dov Beirish Weinberg of Krakow, to my eldest daughter, Ariella Rachel Weinberg of Jerusalem.

Published in The Jerusalem Post, eve of Yom Hashoah 5773, Friday, April 5, 2013. A different version of this story was previously published in Israel Hayom. A Hebrew version can be found here.

This is a story about a kvitel, a little prayer note, that connects five generations of my family. It connects my great grandfather, Dov Beirish Weinberg of Krakow, with my eldest daughter, Ariella Rachel Weinberg of Jerusalem. It is a story about the power of Jewish history, about survival beyond the Nazi Holocaust, and about the Jewish people’s historic return to the land of Israel. It happened only five years ago.

Shortly after the passing in 2006 of my father, MK Professor Henry H. (Zvi Meir) Weinberg, of blessed memory, my brothers and I were digging through the voluminous papers and books in his Jerusalem apartment. 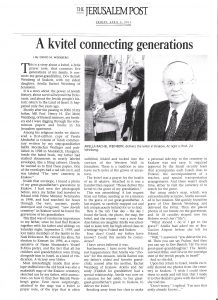 Among his religious books we discovered an original, first edition copy of Pardes Mordechai (a volume of Torah commentary written by my step-grandfather Rabbi Mordechai Wulliger and published in 1928 in Munkatch, Hungary). Inside the faded book, my father had stashed documents in neatly labeled envelopes, like a filing cabinet. Clearly, my father wanted us to find these papers. One of the envelopes had a red tab on it, and was labeled “The ‘new’ cemetery in Krakow.”

Inside that envelope, I found a photo of my great grandfather’s gravestone in Krakow. I had seen the photograph before, since my father had travelled to Poland with Prime Minister Netanyahu in 1998, and had searched for hours through the vast, ancient, partly destroyed and overgrown “new Jewish cemetery” in Krakow until he found the gravestone of his grandfather.

This find was of enormous importance to my father, since he had fled Krakow together with his father and siblings on Saturday night, September 2, 1939, and lost many members of the family to the Nazi Holocaust. He viewed his aliyah, his election to Knesset (in 1996, as a representative of Natan Sharanky’s Yisrael Be’Aliyah political party), and the fact that all his children and grandchildren were living alongside him in Israel, as a kind of vindication. A victory over Hitler.

Most interestingly, inside that envelope stuffed into the old book was also a makeshift map of the Krakow cemetery, sketched out by my father, with instructions on how to find Dov Beirish Weinberg’s grave. Even more surprisingly, attached to the map was a kvitel (a prayer note, of the type that is often scribbled, folded and tucked into the crevices of the Western Wall in Jerusalem. There is a tradition to also leave such notes at the graves of ancestors). The kvitel was a prayer for the health of an ill relative. Attached to the kvitel was a handwritten request: “Please deliver this kvitel to the grave of my grandfather.”

This was astonishing! A last request from our father, sending us on a mission to the grave of our great-grandfather. A last request, so carefully mapped out and left conspicuously behind for us to find.

Here is the rub: That day – the day I found the book, the photo, the map, the kvitel, and the request – was a mere four days before Ariella my daughter was scheduled to leave with her high school class on a heritage trip to Poland and Krakow.

Four days! Could my father have known? Could this merely be coincidence?

I have never believed it was.

Furthermore, I have never believed it just happenstance that Ariella was “chosen” for this mission. Ariella Rachel was my father’s oldest and favorite grandchild, named after his mother, Rachel Weinberg of Krakow. Ariella and her Zeidy (Yiddish for grandfather) had a special relationship. Ariella was now on a mission for her Zeidy, to her great-great-grandfather’s grave in Krakow, to deliver the kvitel.

Breaking away from her class to make a personal side-trip to the cemetery in Krakow was not easy. It required approval by the Israeli security team that accompanies each Israeli class in Poland, the accompaniment of a teacher, and special transportation arrangements. And there wasn’t much time, either to visit the cemetery or to search for the grave.

But using Zeidy’s map, which was extraordinarily accurate, Ariella succeeded in her mission. She quickly found the grave of Dov Beirish Weinberg, and delivered the kvitel. Then she placed photos of our family on the gravestone, and lit 10 candles shaped into the Hebrew word chai (life).

“What should I do if I get to the grave?” Ariella had asked me at Ben-Gurion airport before she left for Poland.

“Well,” I answered, “you deliver the kvitel. Then you can say Psalms. And then you can say to Dov Beirish: ‘Hi! I’m your great-great-granddaughter! The family survived Hitler, and I live in the sovereign state of the Jewish people, in Israel!”

And so she did.

Upon her return to Israel, Ariella excitedly showed me photos from the cemetery in Krakow. “I wish I could show these to Zeidy and tell him that I made it to Dov Beirish’s grave with the kvitel,” she said to me.