Is Obama smothering Israel with affection in order to clobber us with ultimatum? Will his soft love soon give way to spoonfuls of tough love? The president shouldn’t expect Israelis or Netanyahu to all-of-a-sudden become “pliant” because he gave a few good speeches in Jerusalem.

President Obama’s thermonuclear charm offensive in Israel this week was sweet music to my ears. I truly enjoyed the talk of eternal alliance (lanetzach!), unswerving commitment to Israel’s security, and the Jewish People’s historic rights in the Land of Israel.

I know that such reaffirmations of the US-Israel bond are critically important to our staying power and deterrent power. They send a strong signal to Israel’s adversaries. They are much appreciated, and I salute the President for his magnanimous visit. I credit US Ambassador Dan Shapiro for convincing Obama to take the high road and share the love.

But I worry that Obama’s soft love may soon give way to spoonfuls of ‘tough love.’ 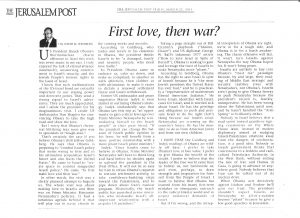 That’s certainly the case if you believe Obama’s shill Jeffrey Goldberg. He says that Obama is preparing to “combat Israeli policy that seems wrong to him and in his estimation jeopardizes Israel’s future and also hurts the United States.” He came to Israel in order to “create space to combat misguided Israeli policy.” He came “to first make love and then war.”

Goldberg suggests that the visit was a slickly-planned attempt to beguile us; that it was about making love to Israelis and then war on Prime Minister Netanyahu’s policies; that it had a nefarious agenda behind it, which will play out in nasty chords in the coming weeks and months.

According to Goldberg, who trades and revels in his closeness to Obama, the President thinks Israelis to be “a damaged, lonely, and neurotic people, who need love badly.” So President Obama came to embrace us, calm us down, and make us compliant; to smother us with affection, then clobber us with ultimatum; to make it easier to dictate a renewed settlement freeze and Israeli withdrawals.

Former US ambassador and peace negotiator Martin Indyk is even starker in outlining Obama’s strategy. Indyk unabashedly says that Obama saw this trip as “an opportunity to gain critical leverage over Prime Minister Netanyahu by reintroducing himself to the Israeli people” as their great friend. “If the president can change the balance of Israeli public opinion in his favor, he will benefit from a more positive relationship with a more pliant Israeli prime minister.”

Indyk: “Once Israelis come to believe in Obama, Prime Minister Netanyahu will have to think long and hard before he decides again to upbraid the president in the Oval Office. It will not be so easy for him to refuse Obama’s requests to restrain settlement activity, to take confidence-building steps toward the Palestinians, and to pipe down about Iran’s nuclear program. Historically, the Israeli public has punished prime ministers who mishandle Israel’s all-important relationship with a popular US president.”

Taking a page straight out of Bill Clinton’s playbook (“Shalom Chaver”) and George W. Ball’s infamous 1977 article (“How to Save Israel in Spite of Herself”), Obama is seeking to gain and leverage the trust of Israelis in order to make Netanyahu more “pliant.”

According to Goldberg, Obama has the right to save Israel in spite of herself because he is “the most Jewish president the United States has ever had” and he is practically a “representative of mainstream liberal American Judaism.” He loves Israel, identifies with Israel, cares for Israel, and is worried sick about Israel. He has the privilege and obligation to push and pressure Israel to do the right (Left!) thing because our leaders (read: Netanyahu) are screwing up the country’s future. He has the mandate to do so from American Jewry and from our own children.

I HOPE THAT the Goldberg and Indyk readings of Obama are wildly off base. I prefer to take Obama’s love at face value. I prefer to give Obama the benefit of the doubt. I prefer to believe that the leader of the free world came here to bolster us, not bamboozle us; and even, perhaps, to draw strength and inspiration for himself from the People of Israel. I want to believe that Obama has learnt from his many first-term mistakes in obsequious outreach to the radical Islamic world and in unjust unilateral demands of Israel.

But if I’m wrong, and the intrepid interpreters of Obama are right, we’re in for a rough ride, and Obama is in for a harsh awakening. The charm offensive will fail. It won’t turn Israelis against Netanyahu the way Obama hoped for. It won’t bring peace.

Israelis are unlikely to buy into Obama’s “trust me” paradigm because, by and large, their reading of Middle East strategic and security realities jives with Netanyahu’s, not Obama’s. Israelis aren’t going to give Obama leeway to push Netanyahu because the President’s record is, frankly, unimpressive. He has been wrong about the Palestinians until now, and he hasn’t handled the “Arab Spring” so brilliantly either.

Nobody in Israel believes that a mad sprint towards grandiose signing ceremonies on the White House lawn, instead of modest diplomacy aimed at nudging Israeli-Palestinian relations away from the dangers of confrontation, is a good idea. Nobody in Israeli government thinks that concessions to a feckless and radicalized Palestinian Authority in the West Bank, without ending the rule of Iran and Hamas in Gaza, is going to advance us anywhere good. Nobody believes that Iran can be talked out of its nuclear drive.

When Obama acts decisively against Isfahan and Fordow he’ll gain our trust. The president shouldn’t expect Israelis or Netanyahu to all-of-a-sudden become “pliant” because he gave a few good speeches in Jerusalem.