Sending your son off to serve in a frontline Israeli army combat unit is a raw test of Zionist commitment. It makes you a real Israeli.

Published in Israel Hayom on March 11, 2013 as “The Bakum initiation,” and in The Jerusalem Post on March 29, 2013 as “On becoming a real Israeli.” Click for a printer-friendly version.

I’ve lived in Israel for 23 years. I speak polished Hebrew, live in an Israeli neighborhood with very few ‘Anglos,’ work for several major national institutions, write a regular diplomatic column in two Israeli newspapers, and have held a senior position in the Israel Prime Minister’s Office. Five of my six kids were born in Israel, and I have an Israeli-born son-in-law who is an officer in IDF military intelligence.

But it wasn’t until today that I became a real Israeli.

Today I drove my eldest son, Dovi, to the ‘Bakum,’ the IDF’s main enlistment center at Tel Hashomer, where he was inducted into a frontline, elite infantry combat unit for mandatory military service.

I cried, a lot. Now I am an Israeli. Call it the Bakum initiation.

This index contrasts mothers (and fathers) with sons in the IDF who lie awake at night wondering where their sons are, what they are doing, what danger they are in, and when and whether they will be coming home; with mothers whose sleep is undisturbed by such existential worries.

I can tell you that last night, my wife didn’t sleep much, and Dovi is just starting out on his first tour of duty!

Dovi and I had a private talk after morning prayers yesterday, in which he asked me if I had any pre-draft advice. Since my military career is gloriously close to non-existent (I served in the IDF for a grand total of one week!), there wasn’t a lot of practical advice I could give him, except to take care of himself physically, guard himself spiritually and religiously, protect his platoon buddies and the country to the best of his abilities, and try to call home every day. 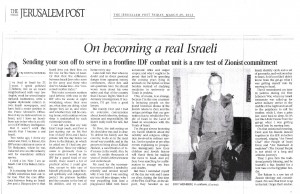 I also told him that when in doubt and in direct personal danger from apparent enemy combatants, shoot first and ask questions later. He should worry more about his own safety and that of the country than Human Rights Watch or Amnesty investigations. If necessary, I’ll get him a good lawyer.

But mainly Dovi and I had an extensive conversation about Jewish identity, destiny, mission and responsibility. He didn’t really need the talk, but I did.

To Dovi, the task resting on his shoulders was and is clear: To defend his family and the country, to do so in the most moral way possible, and in the process to bring about a Kiddush Hashem, a sanctification of G-d’s name in the world. Also, he said: To rectify thousands of years of Jewish defenselessness and victimhood.

My need for the conversation was primitive. I needed to refortify and remind myself why it was that I was sending my son off into danger; why I was propelling him into a playground filled with Tavor automatic rifles and sniper scopes; and why I ought to be proud that he’ll be spending the coming years lying in ambush on the Syrian or Sinai borders instead of studying medicine in university or Torah in yeshiva.

This, of course, is so strange, because I’m the one constantly lecturing people on the grand historical drama of the Jewish return to Zion and the unique privilege that our generation has to rebuild the People of Israel in the Land of Israel in accordance with the Torah of Israel. I’m the guy always hectoring my Haredi relatives about the nobility and religious obligation involved in military service. I’m the speaker at pro-aliyah events explaining to prospective immigrants how their children and Jewish history will thank them for making the move to Israel. And yet, here I was searching for reaffirmation to assuage my fears and doubts.

But then I reminded myself of the day my wife and I came on aliya, during the first days of the First Gulf War. At the airport, they handed us our Israeli identity cards and a set of gas masks, and welcomed us to Israel. So it’s not like I didn’t know from the get-go what I was getting myself into by moving to Israel.

Then I remembered my time in hesder yeshiva during the First Lebanon War, when my Israeli roommate was called-up for active military service in the middle of the night and ran off to the payphone to call his mother, while I, then a ‘golus Jew,’ went back to sleep. So it’s not like I didn’t know from the get-go what I was getting myself into by moving here.

This morning, Dovi and his friends danced together in the IDF induction courtyard, singing Am Yisrael Chai (the People of Israel lives) and Am Hanetzach lo mefached (The Eternal People is not afraid of a long and arduous journey). Then I gave him the traditional priestly blessing, and he boarded a bus headed for a tent base on the Egyptian border.

The Bakum is a raw test of Zionist ideology and commitment. I’m sure that Dovi is up to the test. I hope that I am too.