Reclaiming the ‘World of Torah’

The Haredi community does not possess exclusivity on ‘the world of Torah,’ and in historic perspective it may yet come to thank Bayit Yehudi for nudging it to a better place.

Published in The Jerusalem Post, March 8, 2013, and Israel Hayom, March 10, 2013.  Published in Hebrew on March 17 in News First Class. Click for a printer-friendly copy.

Ultra-Orthodox leaders are in an uproar because Religious Zionists got the upper hand in the recent elections, and will probably be part of the next government while Haredi representatives won’t. They’re yelling about the destruction of the “world of Torah” that will result from societal reforms that Bayit Yehudi insists upon.

So here’s a news flash for my Haredi brethren: You do not possess exclusivity on “the world of Torah,” and in historic perspective you may yet come to thank Bayit Yehudi for nudging you to a better place.

No less than you do, religious Zionist Jews represented by Naftali Bennett’s resurgent national religious party want to strengthen the “world of Torah” – by keeping mitzvot, studying Torah and expanding yeshiva institutions, and by serving in the military, advancing the Israel’s technological and industrial prowess, and contributing to the economy.

All of the above strengthen the “world of Torah.” 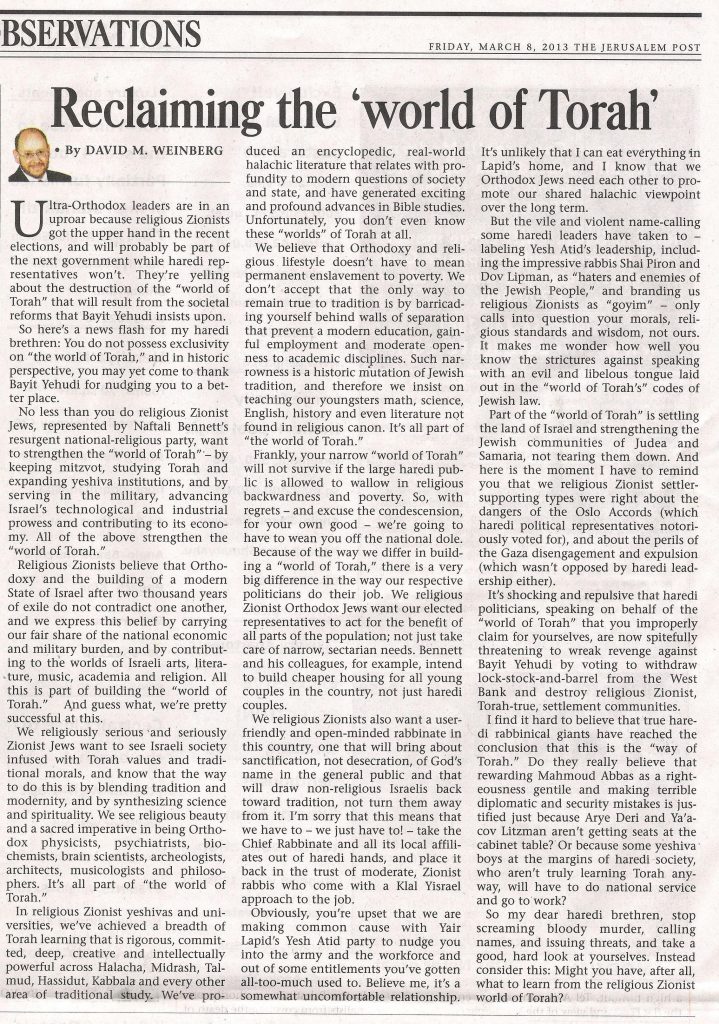 Religious Zionists believe that Orthodoxy and the building of a modern State of Israel after two thousand years of exile do not contradict one another, and we express this belief by carrying our fair share of the national economic and military burden, and by contributing to the worlds of Israeli arts, literature, music, academia, and religion. All this is part of building the “world of Torah.”

And guess what, we’re pretty successful at this.

We religiously serious and seriously Zionist Jews want to see Israeli society infused with Torah values and traditional morals, and know that the way to do this is by blending tradition and modernity, and by synthesizing science and spirituality. We see religious beauty and sacred imperative in being Orthodox physicists, psychiatrists, bio-chemists, brain scientists, archaeologists, architects, musicologists and philosophers.

It’s all part of “the world of Torah.”

In religious Zionist yeshivas and universities, we’ve achieved a breadth of Torah learning that is rigorous, committed, deep, creative, and intellectually powerful across halacha, midrash, Talmud, chassidut, kabbala, and every other area of traditional study. We’ve produced an encyclopedic, real-world halachic literature that relates with profundity to modern society and state, and have generated exciting and profound advances in Bible studies.

Unfortunately, you don’t even know these “worlds” of Torah at all.

We believe that Orthodoxy and religious lifestyle doesn’t have to mean permanent enslavement to poverty. We don’t accept that the only way to remain true to tradition is by barricading yourself behind walls of separation which prevent a modern education, gainful employment, and moderate openness to academic disciplines. Such narrowness is a historic mutation of Jewish tradition, and therefore we insist on teaching our youngsters math, science, English, history, and even literature not found in religious canon.

It’s all part of “the world of Torah.”

Frankly, your narrow “world of Torah” will not survive if the large Haredi public is allowed to wallow in religious backwardness and poverty. So, with regrets – and excuse the condescension, for your own good – we’re going to have to wean you off the national dole.

Because of the way we differ in building a “world of Torah,” there is a very big difference in the way our respective politicians do their job. We Religious Zionist Orthodox Jews want our elected representatives to act for the benefit of all parts of the population; not just take care of narrow, sectarian needs. Bennett and his colleagues, for example, intend to build cheaper housing for all young couples in the country, not just Haredi couples.

We religious Zionists also want a user-friendly and open-minded Rabbinate in this country, one that will bring about sanctification, not a desecration, of G-d’s name in the general public, and that will draw non-religious Israelis back towards tradition, not turn them away from it. I’m sorry that this means that we have to – we just have to! – take the Chief Rabbinate and all its local affiliates out of Haredi hands, and place it back in the trust of moderate, Zionist rabbis who come with a Klal Yisrael approach to the job.

Obviously, you’re upset that we are making common cause with Yair Lapid’s Yesh Atid party to nudge you into the army and the workforce and out of some entitlements you’ve gotten all-too-much used to. Believe me, it’s a somewhat uncomfortable relationship. It’s unlikely that I can eat everything in Lapid’s home, and I know that we Orthodox Jews need each other to promote our shared halachic viewpoint over the long term.

But the vile and violent name-calling some Haredi leaders have taken to – labeling Yesh Atid’s leadership, including the impressive Rabbis Shai Piron and Dov Lipman, as “haters and enemies of the Jewish People,” and branding us Religious Zionists as “goyim” – only calls into question your morals, religious standards and wisdom, not ours.

It’s makes me wonder how well you know the strictures against speaking with an evil and libelous tongue laid out in the “world of Torah’s” codes of Jewish law.

Part of the “world of Torah” is settling the land of Israel – strengthening the Jewish communities of Judea and Samaria, not tearing them down. And here is the moment I have to remind you that we Religious Zionist settler-supporting types were right about the dangers of the Oslo Accords (which Haredi political representatives notoriously voted for), and about the perils of the Gaza disengagement and expulsion (which wasn’t opposed by Haredi leadership either).

It’s shocking and repulsive that Haredi politicians, speaking on behalf of the “world of Torah” which you improperly claim for yourselves, are now spitefully threatening to wreak revenge against Bayit Yehudi by voting to withdraw lock-stock-and-barrel from the West Bank and destroy religious Zionist, Torah-true, settlement communities.

I find it hard to believe that true Haredi rabbinical giants have reached the conclusion that this is the “way of Torah.” Do they really believe that rewarding Mahmoud Abbas as a righteousness gentile and making terrible diplomatic and security mistakes is justified just because Aryeh Deri and Yaakov Litzman aren’t getting seats at the cabinet table? Or because some yeshiva boys at the margins of Haredi society, who aren’t anyway truly learning Torah, will have to do national service and go to work?

So my dear Haredi brethren: Stop screaming bloody murder, calling names, and issuing threats, and take a good, hard look at yourselves. Instead, consider this: Might you have, after all, what to learn from the religious Zionist world of Torah?