Netanyahu and Bennett should back Rabbi David Stav’s candidacy for the post of Ashkenazi Chief Rabbi of Israel. Israel needs a Chief Rabbi who will emphasize “Klal Yisrael” and rehabilitate the “Rabbinocracy” (the Rabbinate bureaucracy) – without compromising halacha or insolently stonewalling secular Israel.

Hebrew-language versions were published on the News First Class site on Feb. 26, and in The Post on March 1.

In June, 98 rabbis, 35 mayors and 17 public figures will vote in secret ballot to elect Israel’s next chief rabbis for a ten-year term. But in truth, the identity of the new chief rabbis will likely be determined between now and March 17 in the current negotiations for formation of a new coalition government.

I say that this decision may be as important as any issue on the national security or domestic agenda, and I call upon Prime Minister Netanyahu to get behind the right man for the Ashkenazi chief rabbi job – Rabbi David Stav, head of the Modern Orthodox, Religious Zionist “Tzohar” rabbinical alliance.

Unlike other countries where “Chief Rabbi” is mainly an honorary title and the “Chief” primarily serves a ceremonial role, the Israeli Chief Rabbinate (and its satellite bureaus in municipalities, rabbinical courts and kashrut agencies) is a powerful governmental agency with thousands of employees that has a dramatic impact on the lives of every Jewish man and women in Israel, from birth to death. Issues such as Jewish status, conversion, marriage, divorce, burial and more are all legally regulated by the Rabbinate. Moreover, decisions of the Israeli Chief Rabbinate have enormous impact on the Jewish status, legitimacy, and affiliation with Israel of Jews around the world.

Unfortunately, over the past twenty years the increasingly Haredi-dominated Rabbinate has misused its powers, applying extreme stringencies in matters of personal status and conversion, creating many bureaucratic obstacles to practicing Judaism in Israel, and fostering deep resentment within both religious and secular society and among Jews around the world. In fact, the Chief Rabbinate has evolved into a force that is deeply contrary to the inclusive Zionist spirit it once embodied. All Jews – left and right, religious and secular, settler and suburban – pay the price. The Rabbinate bureaucracy, or “Rabbinocracy,” must be rehabilitated, its mandate redefined, and its radicalization curbed. 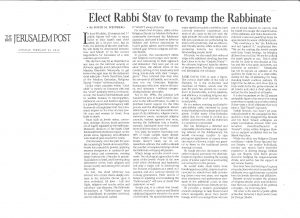 IT WASN’T ALWAYS this way. For Israel’s first 40 years, rabbis of the Religious Zionist (or Modern Orthodox) community dominated the Rabbinate apparatus, and used it both to advance Shabbat and kashrut observation in Israel’s public sphere, and to bridge the cultural gaps between religious and secular Israelis. In general, this community’s rabbis and religious court judges were moderate and welcoming in their approach and demeanor. They were part of, not aloof from, the Zionist ethos of the country, serving in the Israeli army and living side-by-side with their “congregants.” They believed that they were the servants of all Israelis, and as such, they ran the Orthodox Rabbinic bureaucracy with love, relative efficiency, and openness – without compromising halachic principles.

But in the 1990s, the political Left handed the keys to Israel’s Jewish character to the Ultra-Orthodox, in order to purchase Haredi support for the Oslo process and the disengagement. Haredi rabbis began a slow but inexorable conquest of city rabbinates, religious courts, conversion courts, municipal religious councils, kashrut agencies and more, turning the Rabbinate into a hostile, contrary, backwards force that created more problems than it solved.

It is, sadly, no surprise that today one-fifth of Israeli couples marry abroad. That’s 10,000 couples. If the Chief Rabbinate doesn’t clean up its act, researchers estimate that within a decade the number of couples marrying outside the Rabbinate will jump 40 percent.

Which brings us to the current crossroads. The ideological approaches to the unity of the Jewish People of the new Chief Rabbis (Ashkenazi and Sephardi) will play a major role in determining the fortunes of Judaism as a creed, as a practice, and as a national identity for coming generations. Their success or failure in repairing and revitalizing the “Rabbinocracy” will save or doom that institution, as well.

Simply put, it is critical that broad-minded, moderate, vigorous and Zionist rabbinical figures be elected to the posts of Chief Rabbi. We need Chief Rabbis that enjoy significant public credibility, have concrete executive experience, and most of all, come to the job with the right attitude. We need Chief Rabbis who will put on premium on synthesizing tradition with modernity, and on efficient, user-friendly service, while neither compromising halacha nor insolently stonewalling secular Israel.

Of course, we also need Chief Rabbis of respectable rabbinical standing, but they don’t have to be the “Gedolei Hador” – the ultimate, high-end halachic arbiters of the generation. The job is managerial and ideological, not scholarly.

RABBI DAVID STAV is such a figure. The current chief rabbi of the City of Shoham, he is the co-founder and chairman of Tzohar, which over the past twenty years has proven its commitment to Jewish unity, and its creativity and efficiency in making religious ritual life accessible and relevant to the broad public. He is a serious, exacting and halachically-faithful rabbi, endorsed by some today’s leading yeshiva deans and Torah giants. Unlike many Ultra-Orthodox rabbis, Stav also served in combat as a soldier and reservist, and his eldest son is a paratroop commander.

Rabbi Stav has developed a detailed and responsible plan for deep and long-lasting reforms of the Rabbinocracy. He would encourage couples to sign prenuptial agreements to ensure wives can request a divorce, a right not granted to them in the traditional Jewish marriage contract. He would privatize the kosher certification industry and make the Chief Rabbinate its regulator, lowering the soaring prices of kosher supervision and rooting out corruption in the process.

He would make ritual baths more handicapped accessible, require ritual circumcisers to refresh their skills in training classes every two years, and require strict attendance and performance standards in the rabbinical courts to clear away backlog and ensure friendly service.

He promises a massive genealogical research campaign to help Russian (and other) immigrants prove their Jewish lineage, and to encourage those who are not of Jewish descent to convert. And he would encourage the academization of the rabbinate, and make Zionist commitment a relevant qualifying factor for appointment to senior rabbinical posts.

“My candidacy is ‘for’ the Rabbinate and not ‘against’ it,” emphasizes Rabbi Stav. “We are for uniting the Jewish people with their Torah heritage, for bringing all Jews closer to G-d. We are for uniting the Israeli people as one.  This is what we did for close to two decades at Tzohar and this is the spirit: Inclusivity, not exclusion or coercion.”

Benjamin Netanyahu has yet to express an opinion on the qualities he looks for in a Chief Rabbi, mainly for fear of alienating his long-standing Haredi coalition partners. It’s high time he did so, and show that he truly wants to be the Prime Minister of all Israelis and elect a Chief Rabbi who will act for the benefit of all Israelis.

It is also incumbent on the 52 mayors and public figures that are on the voting committee to speak up and take a stand, if they want a Chief Rabbinate that truly takes a “Klal Yisrael” approach.

Naftali Bennett, too, hasn’t yet committed himself to the campaign for Rabbi Stav, and this is truly disappointing. Bennett and his Bayit Yehudi colleagues are under tremendous pressure from conservative (Haredi-influenced or “Hardal”) circles within Religious Zionism to support candidates that are less liberal than Rabbi Stav.

While the other two Religious Zionist candidates – rabbis Eliezer Igra and Yaacov Shapira – are worthy individuals, neither can match Rabbi Stav’s executive experience in driving change. Neither Rabbi Igra nor Rabbi Shapira have Stav’s proven record in bridging the religious-secular divide, and neither has the support of any secular Israelis. Rabbi Stav does have the backing of a group of secular Jews who wish to see the Chief Rabbinate once again become a positive force for Jewish identity and affiliation.

Bennett should re-assert the primacy of religious-secular unity and inclusiveness that was a hallmark of his political campaign – by endorsing Rabbi Stav.