A solution to the Haredi draft problem

As the issue of military service for Haredi men comes to a boil, I think that I have a solution! My solution can save Prime Minister Netanyahu’s coalition negotiators a great deal of angst and trouble. It can save Israeli society a ton of aggravation and discord.

My resolution for the Ultra-Orthodox draft conundrum won’t require Haredi politicians or rabbis to abandon their high principles (– as Haredi leaders say: “No one who wants to study Torah should be prevented from doing so, without restrictions or quotas”). My solution won’t require the IDF or the police to drag a single Haredi youngster out of his yeshiva or his home.

Similarly, my solution for this vexing matter won’t require secular Israelis to put aside their nationalistic ethics or their values (as in, “One man, one vote, one soldier – no exceptions”). Nobody will have to stomach the unfairness of sending their son off to the military front while hearing the obnoxious claim that Haredim are “equally putting their lives at stake in the tents of Torah.” 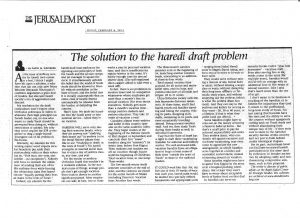 Indeed, my solution for the Haredi draft issue embraces the opposing core principles of both the Haredi and the secular camps, and yet manages to square the circle. It simultaneously and concurrently upholds the belief that the world of Torah study should be allowed to flourish without restriction in the State of Israel, and the belief that it is morally unacceptable that an entire class of Israeli citizens automatically be released from the burden of defending the country.

Here’s how: We draft the Ultra-Orthodox into the Israeli army or into national service – when they’re on vacation.

Haredim serve only during their semester breaks, when they are anyway not “studying their hearts out” in yeshiva (or in the literal Hebrew phrase they like to use: “Studying to death in the tents of Torah”). No Haredi youngster or married kollel man has to miss a day of yeshiva classes, any time, any year.

For the secular or Modern Orthodox Israeli this wouldn’t be a workable solution. In the normal course of things, average people don’t get enough vacation from work to devote to another significant pursuit. Most employees can take, at best, two or three weeks a year in personal vacation time, and this is insufficient for regular service in the army. It’s barely enough time for annual reserve duty. (The self-employed often cannot afford to take even a week off!)

In fact, there is no profession in modern Israel and no occupation whatsoever where employees get more than a month’s time in annual vacation. Not even senior executives. Nobody gets more than a month’s vacation time – except yeshiva students and yeshiva educators. They take TEN weeks vacation a year!

Consider: Almost every yeshiva and kollel in this country operates on the same academic calendar. They begin studies at the beginning of the Hebrew month of Elul (August or September) and conclude their first “zman” (yeshiva slang for ‘semester’) six weeks later before Yom Kippur. Then students and teachers are off on vacation though Succot until the beginning of Cheshvan. Total vacation time, in one lump: Three weeks.

The five-month winter study semester concludes at the end of Adar, whence yeshivas are closed for the entire month of Nissan (including Passover). Vacation time: Another four weeks. The three-month summer semester ends at the beginning of Av, launching another vacation break, amounting to an additional three-to-four weeks.

Total vacation accrued, for all junior and senior kollel men, yeshiva boys, and yeshiva educators of all ranks and stripes: ten to eleven weeks of annual vacation. Ultra-Orthodox society calls this “bein hazmanim” (between semesters). At these vacation times, you’ll find Haredi youth and Haredi families travelling and hiking the country, visiting its parks, shopping in its malls, swimming in its pools, and even occasionally travelling abroad. Doing normal vacation stuff. And yes, they study Torah during these breaks as well, in informal frameworks.

I say that the State of Israel has a right to draft these vacationing Haredim for national and military service. The well-endowed-with-vacation Haredim have an obligation to forgo at least some of their time “outside the tents of Torah” to share in the national burden.

It could work like this: For, say, five out of their ten weeks of vacation each year, Ultra-Orthodox men would be drafted into specially-refined frameworks and appropriate units – ranging from Haredi Nachal units to Magen David Adom, and from rescue services to hi-tech air force units.

They would serve without missing a minute of any formal ‘seder’ or ‘zman’, without missing a single class or exam, without disrupting their long-term Rabbinic or Talmudic study plans, and without emptying out the yeshivas (which is what the yeshiva deans fear most). And they can stay in the yeshivas and kollels for as long as they want – 20 or 30 or 40 years or a lifetime, if that is what they prefer (and can afford).

Some Haredim might have to miss out on the luxury of having a Pesach seder at home – but that’s a small price to pay for national responsibility and unity. Their yeshiva deans, who constantly rail against excessive and too-loose vacationing, may even come to appreciate the new arrangement, in which Haredim serve together in a kosher and controlled environment, instead of running around on vacation.

Some Haredim might even have to spend Yom Kippur in the army or in a hospital pushing wheelchairs. But at least they won’t have to worry about acceptable levels of kosher food on that day!

So Haredim can serve on semester break. Call it “giyus bein hazmanim” – vacation draft. Even after serving five or six weeks a year in the army (for multiple years), Haredim would still be left on average with an additional four to five weeks of annual vacation. Like I said, that’s much more than the rest of us get.

I don’t mean to be facetious or mocking of the Ultra-Orthodox, or to belittle the importance they attach (as do I) to the professional, long-term study of Torah. I’m just saying that Haredim have the time and the ability to serve the country without egregiously cutting back on Torah study and without abandoning their unique way of life – if they truly care to share in the national security burden of this country and not just to hide behind creaky ideological slogans.

For its part, mainstream Israel can facilitate increased Haredi participation in the army (and by extension, in broader society too) by adopting crafty and non-threatening compromise solutions, such as this proposal.