According to Gerald Scarfe’s cartoon in the London Sunday Times, Netanyahu is a callous, bloodthirsty, out-of-control maniac who eats Palestinians for breakfast, grinds their bones for lunch, mixes their blood for mortar before afternoon tea, and uses their skulls as building blocks before sitting down to dinner. If that’s not anti-Semitic, I don’t know what is. 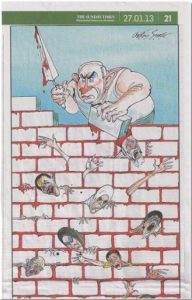 Published in Israel Hayom, January 29, 2013. Click for a printer-friendly copy.

Gerald Scarfe’s blood-curdling anti-Israel cartoon in the London Sunday Times this week is a proverbial canary in the coalmine. It should sound a piercing alarm about the breakdown of all limits on reasonable discourse when it comes to Israel.

The editorial cartoon depicts the newly-reelected Israeli Prime Minister Benjamin Netanyahu building a wall with the blood of Palestinians for cement, and trapping writhing Palestinian skulls among the bricks. “Israeli elections – Will cementing peace continue?” reads the caustic caption.

It’s clear that the image is meant not only to express criticism of Israeli diplomacy (say, the building of the security fence, the denial of Palestinian independence, and the suffering of Palestinians under Israeli occupation). It’s clear that the imagery is meant also to evoke Biblical imagery of Pharaoh burying alive Israelites in the walls of the palaces and pyramids of Egypt – a Biblical tale that every young Christian and Jewish youngster is familiar with.

It’s clear that the cartoon not only criticizes Israel, but demonizes it.

It says: Israel’s Netanyahu is a callous, bloodthirsty, out-of-control maniac who eats Palestinians for breakfast, grinds their bones for lunch, mixes their blood for mortar before afternoon tea, and uses their skulls as building blocks before sitting down to dinner.

It says that Israel’s security fence is a Pol Pot-like construct of horrors, with stacked rows of skulls locked into place by a murderous dictator.

And when published on International Holocaust Memorial Day, it says: Israelis are the new Nazis. Thus, Europe no longer has to feel so guilty for what was done to the Jews sixty years ago. After all, the Jews of Israel are no more moral than the Nazis were.

The cartoon can definitely be labeled anti-Semitic because it crosses the line between legitimate criticism of Israel and “new” anti-Semitism, which aims to emasculate the Jewish People by whittling away at the Jewish State.

This line was clearly defined by Natan Sharansky more than a decade ago when he was Minister for Jerusalem and Diaspora Affairs and founder of the Global Forum against Anti-Semitism. He developed a simple test – he called it the “3D” test – to distinguish legitimate criticism of Israel from anti-Semitism. Sharansky’s test scrutinizes criticism of Israel for demonization, double standards and delegitimization of Israel – which devolve into the dark zone of anti-Semitic expression and intent.

When Israel’s West Bank policies are blown out of all sensible proportion; when comparisons are made between security fences and Khmer Rouge-like execution camps, between genocidal Pharaohs and Israeli Prime Ministers, and between Israeli leaders and Nazi leaders on Holocaust Memorial Day – this is demonization, not legitimate criticism of Israel.

When criticism of Israel is applied selectively; when Israel is singled out for carefully building a defensive security fence that saves both Israeli and Palestinian lives and which is subject to judicial review and adjustment (while the gross human rights abuses of Syria’s Assad, Egypt’s Morsi and Iran’s Ahmadinejad are underplayed); when Israel’s democratically-elected leader is excoriated with blood imagery (while the oppressive sheikhs and sultans of the Islamic world are coddled); when Israel’s vibrant democracy and honorable election result are dismissed as nothing more than an opportunity for Netanyahu to continue killing Palestinians (while the very undemocratic Palestinian leaders continue to oppress their own people) – this is the application of a double standard against Israel, not fair comment or legitimate criticism of Israel.

Almost a decade ago, the great American novelist, my friend Cynthia Ozick, wrote that: “The contemporary Big Lie concerns the Jews of Israel: they are oppressors in the style of the Nazis; they ruthlessly pursue, and perpetuate, ‘occupation’ solely for the sake of domination and humiliation; they purposefully kill Palestinian children; their military have committed massacres; their government ‘violates international law’; their nationhood and their sovereignty have no legitimacy; they are intruders and usurpers inhabiting an illicit ‘entity,’ and not a people entitled as other peoples are entitled; and so on and so on. Reviving both blood libel and deicide, respectable European journals publish political cartoons showing Prime Minister Sharon devouring Palestinian babies, and Israeli soldiers bayoneting the infant Jesus.”

The fact that this cartoon appeared in the mainstream British press, not the crackpot, fringe or radical Islamic press, is telling. It says that Britain is in danger of sliding into sinister anti-Semitic spheres when it comes to discussing Israel.

* The author was founding coordinator of the Global Forum against Anti-Semitism, and senior advisor to former Deputy Prime Minister Natan Sharansky.