Lapid and Bennett: The Dynamic Duo

Israeli media reports suggest that Netanyahu does not want Naftali Bennett’s HaBayit HaYehudi party in his government, mainly because he and Mrs. Netanyahu hold a personal grudge against Bennett and his colleague Ayelet Shaked. Leaving Bennett out would be a major mistake, I argue in this article. I think that the public overwhelmingly wants Lapid and Bennett in the government together. Their seriousness, non-sectarian and unifying approach to Israeli society and politics is the will of the electorate. The dynamic duo, so similar in their beliefs, represent the best values of Israeli society and the clearly-enunciated will of the people.

Yair Lapid’s Yesh Atid (‘There is a Future’) and Naftali Bennett’s HaBayit HaYehudi (‘The Jewish Home’) parties deserve to be the dominant forces in Prime Minister Binyamin Netanyahu’s next government. Together they hold 31 seats in the new Israeli parliament – as many seats as Binyamin Netanyahu’s Likud party has. More importantly, they represent the best values of Israeli society and the clearly-enunciated will of the people.

Alone among Israeli leaders who ran in this election, Lapid and Bennett ran positive campaigns that stressed values and principles, not just policies and demands. They spoke of Zionist commitment, patriotism, honesty in business and politics, a fair shouldering of the military and national economic burdens, and family values. They spoke about civic devotion, and evinced great respect for the social protests of last year. They showed that they understood the pinch felt by the average Israeli. 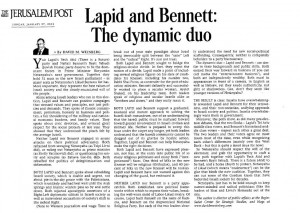 Neither Lapid nor Bennett engaged in arrant attacks on their political adversaries. Both refrained from savaging Netanyahu (as Tzipi Livni did), or ruling out Netanyahu as Prime Minister (as Shelly Yachmovich did), or questioning his sanity and scruples (as Zahava Galon did). Both rebuffed the politics of delegitimization and defamation.

Both Lapid and Bennett spoke about rebuilding Israeli society, which is doable and urgent, not about pie-in-the-sky peace with the Palestinians, which is unlikely and had best wait until the Arab springs and Islamic winters pass us by and settle down. Both rejected apocalyptic assertions of a right-left diplomatic schism in Israeli society as well as malevolent accusations of society’s shift to radical right.

(Note to Western journalists and wags: Time to break out of your stale paradigm about Israel being irrevocably split between the “sane” Left and the “radical” Right. It’s just not true).

Both Lapid and Bennett sought to bridge the religious-secular divide. In fact, they reject the notion of a divide. Lapid made a point of including several religious figures on his slate of candidates for Knesset, including his number two, Rabbi Shai Piron, as contender for the post of education minister. Bennett defiantly and successfully worked to place a secular woman, Ayelet Shaked, on his leadership team. Both leaders speak of religious and secular Israelis alike as “brothers and sisters,” and they really mean it.

Both Lapid and Bennett support a graduated, nuanced and mature approach to solving the Haredi draft conundrum, out of an understanding that the Haredi public must be nurtured forward towards greater involvement in Israeli civilian and military life. Neither is prepared to sweep this issue under the carpet any longer, yet both leaders understand that the Haredi community cannot be dragged out of its ghettos by hostile action. Together, Lapid and Bennett can help Netanyahu make the right decisions.

Neither Lapid nor Bennett is a party apparatchik. Both established new political frameworks within which to express their values, breaking the well-worn mold of Labor-Likud rivalry. Of course, Lapid built himself on the ruins of Kadima and Labor, and Bennett on the ship-wrecked National Religious Party. But each of the two leaders clearly understood the need for new social-political scaffolding. Consequently, neither is completely beholden to a party bureaucracy.

The dynamic duo – Lapid and Bennett – are similar in their backgrounds and public skills too. Both earned their way forward in business (if you can call media the ‘entertainment business’), and both are independently wealthy. Both excel in appearance in front of a camera, in English as well as Hebrew, yet they exude authenticity, not glitz or shallowness. Gee, don’t they seem like younger versions of Bibi Netanyahu?

The result is clear: Israelis have overwhelmingly rewarded Lapid and Bennett for their seriousness, and their non-sectarian, unifying approach to Israeli society and politics. Israelis overwhelmingly want them in government.

Moreover, the polls show, as did many pre-election debates, that the two flocks – Lapid’s Tel Aviv middle class voters, and Bennett’s hinterland middle class voters – respect each other a great deal. The two leaders and their voters agree on most issues most of the time, even while recognizing each other’s differences (mainly over the West Bank – but this is quite a moot issue for now).

So Netanyahu should respect the will of the electorate, and grab the opportunity to craft a new path together with Lapid’s Yesh Atid and Bennett’s HaBayit HaYehudi. There is a future (‘Atid’) to be had, and a home (‘Bayit’) to protect. Netanyahu of Likud (which means ‘coalescence’) can be the glue that binds the new coalition. Together, they can cut some of the Gordian knots that have bedeviled Israeli society for decades.

Netanyahu just has to be bold enough to keep narrow-minded and radical politicians (like the leaders of Shas and Livni’s Hatnuah) out of the mix.