The Israeli public overwhelmingly does not buy the well-worn argument, advanced obstinately by the Left and the international community, that the peace process is stuck because of settlements or lack of Israeli diplomatic flexibility.

Israelis will elect a conservative government this week because they think it prudent to do so, not because they are “turning inwards” or backwards or developing anti-democratic tendencies. They want Binyamin Netanyahu, not Tzipi Livni (or Shimon Peres, or any other candidate of the Left), to lead the country, because caution – not hollow and unsubstantiated hope – is the prevailing watchword.

It’s important to say these things, because in the global punditocracy there is an inaccurate narrative taking root, to wit Netanyahu’s reelection means that Israel is being overrun by right-wing and religious fanatics, and that it is choosing isolationism over opportunities for peace.

In fact, clever pundits like David Remnick of The New Yorker and Ari Shavit of Haaretz have tried to portray the current Israeli election campaign as a historic choice between two competing narratives: that of the isolationist-nationalist Israeli right, and the liberal-democratic-peace-seeking Israeli left.

But these brainy journalists are all-too-slick and only superficially sophisticated. The dichotomous moment they have summoned-forth is false, and their reading of Israeli society and polity is terribly off-base. 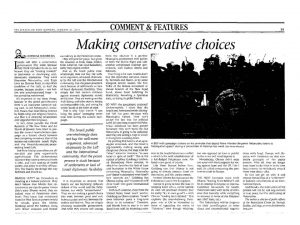 ISRAELIS DON’T see themselves as standing at a historic juncture. They don’t believe that Middle East circumstances are ripe for peace. Given Oslo’s sorry 20-year record, they are indeed wary of Palestinian statehood. They know that withdrawal from the West Bank at present would be suicide, given the Islamic blitzkrieg across the Mideast, along with Abbas’ weakness and Hamas’ ascendency in the Palestinian arena.

They still pine for peace, but given the situation in Sinai, Gaza, Jordan, Syria, Lebanon, Iran (and Ramallah), sadly they expect conflict.

And so, the Israeli public overwhelmingly does not buy the well-worn argument, advanced obstinately by the Left and the international community, that the peace process is stuck because of settlements or lack of Israeli diplomatic flexibility. They simply feel that caution militates against dramatic diplomatic moves at this time. They are waiting-out the ‘Arab Spring’ and other storms, taking no irresponsible risks, and voting for steady hands at the helm of state.

That is why Tzipi Livni’s “I can bring the peace” messaging never took hold during the current campaign.

It is important to reiterate that Israelis are not becoming callously defiant of the world and the Palestinians, nor wildly “annexationist.” They are not making a grand choice this week between good and evil, between peace and war, between liberalism and fascism. They are simply choosing responsible government.

And what they assume will emerge from the election is a go-slow Netanyahu government with parties of both the Zionist right and left; another complicated coalition government, with built-in checks and balances.

One thing is for sure. Israelis don’t buy the doomsday scenarios drawn by Remnick and Shavit, or by some Diaspora Jewish leaders like Eric Yoffie of the Reform movement or Daniel Sokatch of the New Israel Fund, about Israel forfeiting its democracy, becoming a Spartacus state, or losing its global friends.

SO WHY the apocalyptic analyses? Unfortunately, I sense that the Israeli and American Jewish ideological left has gone stir-crazy with Netanyahu hatred. They can’t accept the fact that the political Left’s twenty-year-long crusade for Palestinian statehood has been proven bankrupt; they can’t stand the fact Netanyahu is going to be reelected; and they are setting a trap in which to bring him crashing down.

By positing that Israel is at an apocalyptic crossroads, and that Israel is pigheadedly making wrong and dangerous choices, the stage is set for “wiser” actors to intervene “to save Israel in spite of itself.”

This is the upshot of Jeffrey Goldberg’s celebrated Bloomberg News column, in which he describes the lack of trust and frustration in the White House concerning Netanyahu. Netanyahu just “doesn’t understand what Israel’s best interests are,” Goldberg has Obama saying, and “his conduct will drive Israel into grave international isolation.”

With such isolation, even from the United States, Israel won’t survive, Goldberg (or Obama) opines. “Israel’s own behavior poses a long-term threat to its existence.” Therefore, real friends have to step in to save Israel from itself, by imposing a solution to the Israeli-Palestinian conflict – which is swift establishment of a full-fledged Palestinian state. For Israel’s own good, of course.

Like Peter Beinart before him, Goldberg says that Obama is not going to directly pressure Israel on this matter, and this seems correct. Instead, Obama has outsourced the Palestinian issue to the Europeans. Europe is going to take the lead in wedging Israel into a corner against its own self-perceived interests (but in reality “for its own good”) – with Obama “leading from behind.”

This explains the overwhelming European vote at UN in November in favor of upgrading the status of “Palestine,” even though Washington was opposed (at least in public) to the move and voted against it. Nevertheless, Obama didn’t seem too upset with the Europeans for voting against Israel and the U.S. Like I said, it’s called outsourcing the pressure on Israel to Europe.

The next European move (with Obama “leading from behind”) will be an attempt to impose an internationalized framework for Israeli-Palestinian talks with terms of reference that basically settle everything in advance in favor of the Palestinians (1967 lines, etc.)

The Palestinians will be forgiven for their unwillingness to enter direct and unconditional negotiations with Israel. Europe will dispense with insistence on that venerable principle of the peace process. After all, they no longer trust Israel to do what is in its own best interests (to withdraw), even if there were direct talks.

So best just get on with it and impose the outlines of a “settlement” in indirect consultations or an international forum.

And besides, the main point of the process will not be real negotiations or true peace, but the dethroning of Netanyahu.