With eight days to go to Israel Election Day, this is my colorful review of the political party advertising campaigns and television commercials.

The original version of this was published on January 11, 2013 by Canada’s Center for Israel and Jewish Affairs.

Likud’s campaign seeks to convince conservative voters to give Binyamin Netanyahu a large, governable majority in Knesset, and not to vote for smaller factions on the right or religious parts of the political spectrum.

The mainstay of the Likud-Beiteinu campaign is the slogan: “A Strong Prime Minister: A Strong Israel” (as pictured in the billboard below). By superimposing Netanyahu’s visage on the Western Wall, the ad nods at tradition and suggests that Netanyahu will fight against division of the country’s capital city.

The word “strong” (hazak) in various forms, is repeated over and over again in Likud’s television spots. The intended insinuation here is that Netanyahu best defends Israel’s interests on the international stage. “When Netanyahu speaks, the world listens,” proclaims Likud’s most frequent TV ad. This clip shows him getting standing ovations in Congress, explaining to America that “3,000 years ago King David reigned over the Jewish state in our eternal capital, Jerusalem,” and that “When we say never again, we mean never again.” Then Netanyahu is seen holding up his “Bibi-bomb” graphic and delivering his speech about Iran at the UN.

On the Internet, Likud is running a humorous spoof against the left wing in which a finger puppet of Meretz’s Zahava Galon endlessly blathers “End the occupation,” while another puppet mimics Labor’s Shelly Yachimovich harping incessantly about the evil convergence of “wealth and power” among the elites, including Likud elites. In the end, the left-wing puppets burst into confetti by an Iranian bomb, and they learn that they shouldn’t drone on about things like the occupation and the economy when Iran is developing a nuclear weapon.

Labor’s campaign is crystal clear, arguing that Shelley Yachimovich is the only true leader who truly cares for the social-economic wellbeing of the middle and lower classes. “Bibi is good for the rich,” says the billboard pictured below. “Shelly is good for you.”

Yachimovich’s platform, which promises a series of radical socialist reforms, does not figure prominently in the campaign. Instead, Labor’s television ads seek to humanize Ms. Yachimovich, taking us into her kitchen (which we learn is quite neat, with carefully labeled Tupperware containers in her freezer). Then we learn of her hard-working parents, and her early feminist inclinations. Yachimovich tells viewers that she walked out of a gradeschool home economics class when a teacher taught that women’s roles are ironing, cleaning, and taking care of children.

The billboard poster below with Yachimovich’s picture simply says: “It can be better here!” 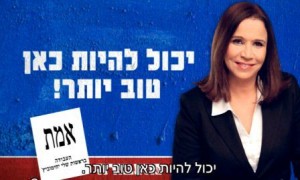 Livni’s campaign is based on black and white imagery, and a lot of pithy rhymes. Bibi and Lieberman lead to “ason” (disaster); Tzipi Livni leads to “shalom” (peace) – reads the billboard pictured below.

Another Livni ad (pictured below) blanketing Tel Aviv and running non-stop in anti-Netanyahu papers like Yediot Ahronot declares that Livni constitutes HOPE. “Sixty-seven percent of Israelis believe that a diplomatic deal with the Palestinians is possible,” the ad tells us, “and Livni will lead Israel to that peace.”

Similarly, the ad below simply says: “Tzipi Livni: The Hope will overcome the Fear.”

On TV, Livni’s new party is in full attack mode. Netanyahu and Lieberman are depicted in gray, dark tones promising to crush Hamas. This is contrasted with newspaper headlines trumpeting the recent ceasefire with Hamas accepted by Netanyahu and Lieberman. Then the screen goes into full color, and we see smiling faces, Livni hugging people, and teenagers dancing. Livni is the hope of the future. “If you have hope, if you want hope, you have someone to vote for,” Livni tells the crowd.

Yesh Atid’s ad campaign consists mostly of Lapid speech clips where he talks about easing the burden on Israel’s middle class, and decrying fiscal favoritism to the Ultra-Orthodox and settler communities. In the ad below, Lapid says that his goal is to bring down the cost of housing “so that our children can afford to buy apartments.”

Another Yesh Atid borrows the “Bibi bomb” graphic to demonstrate the high cost of living for the middle class, which, the ad below says, is “exploding” with debt.

On the radio, Livni, Yachimovich and Lapid are running an all-out war against one another, each claiming to be the “most anti-Netanyahu,” with Livni and Yachimovich promising not to join a Likud-led coalition, while Lapid averring that he would do so only under certain conditions.

The editorial cartoon below (published today in the right-wing paper Makor Rishon) shows Livni, Lapid and Yachimovich tumbling downhill as they throw snowballs at each other, while Netanyahu smiles contently from the mountain peak.

The Meretz party continues to wave its far-left ideological fealty and steadfastness in front of voters. The billboard below simply says “Meretz: Your certain ballot against Bibi.”

One of the best campaigns of this election is being run by Bayit Yehudi, the resurgent National Religious Party led by Naftali Bennett (pictured in the ad below). 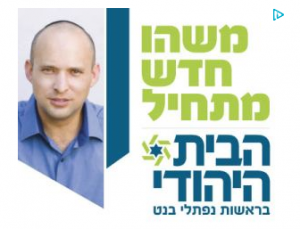 His slogan “Something new is beginning!” is on every lamppost in Jerusalem and Tel Aviv too (where Bennett is apparently picking up youthful secular voters).

The party’s ads in the general press make extensive use of the witty ex-journalist Uri Orbach and the pretty, secular Ayelet Shaked (numbers 5 and 6 on the party slate), who talk about values and patriotism. “Some ask, where’s the money?” Bennett says referencing one of Yair Lapid’s favorite lines. “I ask, where are the values?”

In the religious press, the party’s ads feature candidates who are settlers, noted rabbis and senior army officers. In fact, one Bayit Yehudi ad declares that the party is the most “combat experienced” of all Israeli political parties – which amazingly is true. Seven of its first 12 candidates are senior IDF officers in elite reserve units, some with medals for bravery. One TV segment shows a candidate preparing for a TV shoot in a suit and tie. The camera pans down and shows us that he is wearing well-tread army boots – which are a badge of pride in Israel.

Shas is running an aggressive campaign, featuring its spiritual mentor Rabbi Ovadia Yosef, who says in the ad pictured below that all good religious Sephardic Jews vote Shas because the party cares for the poor, and because he (Rabbi Yosef) says so. Rabbi Yosef so ‘paskens’, meaning that he has decided that Sephardic Jews should vote Shas as a matter of binding religious law.

On TV, Rabbi Yosef tells us that every house needs a mezuza (a ritual marker placed on the doorway of a Jewish home), and that Shas is the mezuza of the government.

Another widely-ridiculed Shas ad run dozens and dozens of pictures of the elderly and infirm, like an online photo gallery of grandparents. Then party star Aryeh Deri comes on, sitting beside his elderly mother, to intone how Shas is or will be the only party to care for these old people.

Shas also crudely plays the ethnic card. In the most notorious ad of the election campaign (so far), Shas shows us a dark-skinned man standing under a wedding chupah with a tall blonde who speaks with a heavy Russian accent. We learn, and so does he, that she is not actually Jewish but is waiting to get an instant conversion faxed to her. This, we are to understand, is what will happen if Shas is not in the government to stand guard at Judaism’s gates and prevent liberal Jews from bastardizing conversion standards. (When the fax comes in, she leans over to kiss the groom, but he now knows she isn’t Jewish and shies away in disgust.) This ad, infamously dubbed “Dial Asterisk for Giyur (conversion)”, was ordered off the air by the chairman of the Central Elections Committee because it was deemed too inflammatory.

Shaul Mofaz’s failing Kadima campaign is one big complaint against the unfairness of being shunted aside. Mofaz is so strong and experienced in the defense of Israel, plaints some very lengthy TV spots, yet he is unfairly being displaced by political newbies and nobodies, says a confrontational moderator. “Who are you to step on Shaul Mofaz?,” he demands. Mofaz “killed terrorists at point-blank range,” and “eliminated terror as no-one had before. For what? So that little people, nobodies, could call him pathetic?!”

“One of Ours, Close to the Troops” says the Mofaz ad pictured below.

Kadima ads also seek to play up Mofaz’s Iranian background, and his social consciousness. We are reminded that he founded the Atidim program in the army (a very successful program that advances the education of disadvantaged soldiers from peripheral areas of the country), and that he once transferred NIS 600 million from the defense ministry to the education budget.

POLLS: Last weekend’s public opinion surveys show a slight rise in support for both Labor (17-18 seats in Knesset) and Bennett (14 seats), at the expense of Shas (down to 10) and Livni (down to 8-9). Lapid holds at 11 seats. Polls in The Jerusalem Post and Israel Hayom have Likud gaining support too (to 34 or 36 seats in Knesset), while Yediot Ahronot has Likud stuck at 33 seats. The results indicate a clear majority of 66-70 seats in Knesset for the conservative bloc. The final pre-election polls will be published this Friday, January 18, five days before the vote.

The Israeli papers are rife with speculation as to Netanyahu’s likely coalition: Will he tack to the center (and bring in Lapid, Mofaz and perhaps Livni), while leaving Shas and/or Bennett plus Labor in opposition; or will he hew to the lines of his current right-religious coalition?

A Detailed look at the Parties and Polls, October 2012

Lay of the Land with Thirty Days to Go, December 2012