Looking into my crystal ball for the year ahead, what I see is a new, broad Israeli government that doesn’t last long, another futile settlement freeze, exacerbated Peres-Netanyahu tensions, continued stalemate with Iran, trouble on the Golan, and despite it all – life in Israel will remain great.

Published in Israel Hayom, January 7, 2013, and in The Jerusalem Post on January 8,2013. Click for a printer-friendly version. 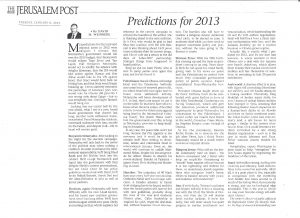 My predictions for the local and regional scene in 2012 were bang on! I foresaw that Netanyahu’s government would fall over the 2013 budget; that Labor prty leader Shelly Yachimovich would eclipse former Kadima head Tzipi Livi and Yair Lapid (Yesh Atid); that Netanyahu would act to solidify his alliance with Avigdor Lieberman; that the IDF would take action against Hamas; that Mahmoud Abbas would got to the UN against Israel; that Israel would hold back on hitting Iran; and that Syria would begin breaking up into pieces. I even correctly estimated the percentage of American Jews who would vote for Obama (68 percent). I was wrong only about Egypt, but so was everybody else. (I thought Field Marshal Tantawi would hang on as leader). 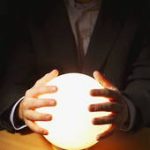 Looking into my crystal ball for the year ahead, what I see is a new, broad Israeli government that doesn’t last long, another futile settlement freeze, exacerbated Peres-Netanyahu tensions, continued stalemate with Iran, trouble on the Golan, and despite it all – life in Israel will remain great.

Binyamin Netanyahu: After tacking to the right for the election campaign, Netanyahu will tack back to the center of the political map when crafting a coalition. In order to enhance his international respectability, he’ll bring Ehud Barak and Avi Dicter back into cabinet. He’ll coopt Shelly Yachimovich and Yair Lapid into government with him (despite Shelly’s current protestations), but not Livni. Once he has policy guidelines worked out with them, he’ll invite Naftali Bennett (Habayit Hayehudi), Arye Deri (Shas) and the Ultra-Orthodox to join as well as junior partners.

Elections again: Netanyahu will have difficulty with his own Likud faction, and his broad new coalition government won’t last long either. We’ll have elections again within two years. Shelly is counting on that, which explains her reticence in the current campaign to criticize the Haredim or the settlers. She is thinking ahead to the next coalition. So is Deri, who would be glad to lead Shas into coalition with the left. Bennett is also thinking ahead. He’ll prove more moderate than his current image, and I don’t rule out a return to the old days of Labor-National Religious Party partnership. Stranger things have happened in Israeli politics.

Keep an eye on Amir Peretz, who is sure to jump parties once again this year, just for the fun of it.

Palestinians: Obama will wedge Israel and the Palestinian Authority into some form of renewed peace talks, for which Israel will once again have to freeze some settlement activity. Netanyahu will freeze development of E-1. In fact, that’s one reason he put it on the table: So that he’d have what to freeze when the time comes. (The other reason: To warn the Palestinians against suing Israel in the International Criminal Court). Habayit Hayehudi won’t bolt the government over this, as long as Netanyahu promises to keep building in Jerusalem.

In any case, the peace talks won’t last long, because the PA’s appetite is too ravenous and it won’t be able to restrain itself from seeking to demonize, isolate and criminalize Israel in international forums. Even so, the world will continue to coddle Abbas, despite his intransigence. As for Abbas’ threats to dissolve his newly-declared “Statelet of Palestine” – ignore them. He is bluffing and blustering, as usual.

Haredim: The induction of 40 black hats once every half year into an Ultra-Orthodox Nahal unit is no longer sufficient. A broader solution to Haredi draft-dodging has to be found, and this time the Haredi parties will have to live with new guidelines, probably along the lines of the wise and moderate Plesner plan. Calm leadership is required for quiet, respectful deal-making, without Supreme Court intervention. The Haredim also will have to swallow a Religious Zionist Ashkenazi Chief Rabbi, to be elected in June. A moderate Chief Rabbi can then work to improve conversion policy and practice, without the issue going to the Knesset or courts.

Shimon Peres: With his 90th birthday coming up and his term as president coming to an end, Shimon Peres clearly feels that he can speak his mind freely, giving vent to his views on peace and the Palestinians no matter how much they contradict government policy or public opinion. Expect exacerbated Peres-Netanyahu tensions. President Obama might show up for Peres’ birthday bash (to be celebrated with great fanfare in June at the fifth Presidential Conference on Facing Tomorrow), which will give the American president additional opportunity to press Netanyahu for concessions to the Palestinians. I would rather see Israel’s best friend in the world, Canadian Prime Minister Stephen Harper, come instead of Obama.

As for the presidency, Ruby Rivlin (Likud) thinks he is shoo-in for the job after Peres, but I think that Natan Sharansky would be a much better and more inspired choice for president of the state.

Diaspora Jewry: Who will set the Jewish community tone on Israel – the Reform movement and J Street who keep on implicitly threatening to “secede” from support of Israel because it is too right-wing and illiberal for them, or mainstream Jewish organizations who recognize Israel’s heroic efforts to balance security with peace, and tradition with modernity?

Iran: If we’re lucky, Teheran’s cockiness and bluster will trip it into a shooting war with the US in the Straits of Hormuz, and then the US will destroy Iran’s nuclear facilities. If we’re less lucky, Iran will make steady but quiet progress in nuclear enrichment and weaponization, while bamboozling the US and EU with endless negotiations. Israel will hold back from a direct military confrontation with Iran, until the Iranians foolishly go for a nuclear breakout or Obama gets a spine.

Actually, this is exactly what I predicted for 2012, and it’s the least bad scenario. The worse scenario is that Obama cuts a deal with the Iranians over Israel’s objections, which allows them to keep their nuclear enrichment facilities and free themselves of sanctions by promising to halt 20 percent enrichment.

Arab world: A domino dynamic is in play, with Egypt still convulsing (President Morsi may not survive), and the Saudis sitting on a boiling cauldron. Thankfully, King Abdullah of Jordan seems stable for now. Dozens of radical Islamic militias have emerged in Syria, meaning that following President Bashar Assad’s departure (to a Russian-built dacha in an Alawite mini-state on Syria’s north-west coast), the Golan border could turn into no-man’s-land, a safe haven for terror groups – similar to the current situation in Sinai. Or it might become a territory controlled by a single strong Islamist organization – such as is the case in south Lebanon and Gaza. Either scenario means trouble for Israel.

Nevertheless, expect Washington to press Israel to help “strengthen” the new Syrian regime by negotiating the handover of the Golan.

Israel: At 8 million strong, sizzling with creativity and vibrancy, Israel will continue to be envied far and wide. All in all, it is a great place to live, especially in comparison with the crumbling Arab Middle East states around us or much of the failing West. Our economy is strong, and our technological edge formidable. This is the year in which we may even become energy self-sufficient. Hurray!