In Jerusalem yesterday, Mitt Romney told us why he is the right person to be the next president of America, and why he would be good for Israel too. It is not because of anything he said regarding Iran or American support for Israel. It’s because he believes in American exceptionalism.

Let me explain. The greatest problem with President Barack Obama is that he seems embarrassed about America and about projecting American power in the world. He spent the first year of his term in office traipsing around the world to apologize for American leadership and for the exercise of American power. At a time when a strong and confident U.S. global posture is critical to confronting the growing power of Iran, of radical Islam and of Russia, Obama seems to be very hesitating, perhaps even appeasing.

Obama certainly gives the impression to outside observers that America under his leadership suffers from strategic fatigue. It is exhausted. It has no sitzfleisch or stamina for truly confronting a nuclear Iran. It is also suffers from strategic confusion. It has no clue how to deal with the Mideast, even as successive Arab regimes crumble and the regional architecture cries out for direction.

Obama’s mix of embarrassed self-doubt and strategic weariness is a recipe for growing uncertainty about American wisdom and leadership. A world without clear and strong American leadership is a very, very unruly place, especially for Israel.

But America is not and need not be in decline. The US can and must quickly snap back to its global responsibilities. And indeed, Israelis see America as a great and ennobling world power.

Enter Romney. “I have spoken many times about my view that this coming century must remain an American century. By that I mean that America should maintain the moral, economic and military leadership that will allow it to remain the leader of the free world and insure that the free world remains the leader of the entire world,” Romney said in his Friday interview with Haaretz.

“My objective will be to describe a foreign policy that shows confidence in our cause, clarity in our purpose and resolve in the application of our might. I believe that over the centuries this nation wisely had a great deal of confidence that our cause was just and that the endeavors we undertook were for good purposes. The clarity of our purpose was described to our citizens and people around the world. When we applied our military might, it was with resolve to be successful and to fulfill a mission.”

“American strength is an ally for peace, unparalleled in world history. We must strengthen America through strong values, a stronger economy and a military that is second to none. I believe that our friends and allies support our strength by linking with us. We in turn reinforce them as they face various foes that seek to weaken them…. A strong nation is admired by its friends and respected by its adversaries.”

“The world is a dangerous place. The Middle East has become far more tumultuous and dangerous as a result of developments over the last year… Iran is closer to nuclearization than it was when President Obama took office. It is hard to feel that the events of the last three and a half years have strengthened America’s posture and promoted the prospects of peace.”

As Romney told the Veterans of Foreign Wars last week: “In dealings with other nations, President Obama has given trust where it is not earned, insult where it was not deserved, and apology where it is not due.”

In short, Romney believes – he really believes! – that America is exceptional. He believes that it is a force for good in the world, and that America must lead.

Perhaps this confidence in America stems from Romney’s Mormon upbringing. Mormonism was born in the United States and it imbues America with spiritual qualities and religious responsibilities. That’s all for the good.

Whether it stems from conservative values, realpolitik perspective, or religious fervor, Romney’s refreshing prism on America’s just leadership would be his greatest gift to the White House and the world.

Postscript: I had the privilege of meeting Mitt and Ann Romney in Jerusalem yesterday, in Yemin Moshe, overlooking the Old City walls. Despite their reported wealth and current high position, they struck me as modest people. Romney even let me take his podium for a moment — see photo below! It was an unusual (and poignant and hopeful) way to spend the final hours of Tisha BeAv. 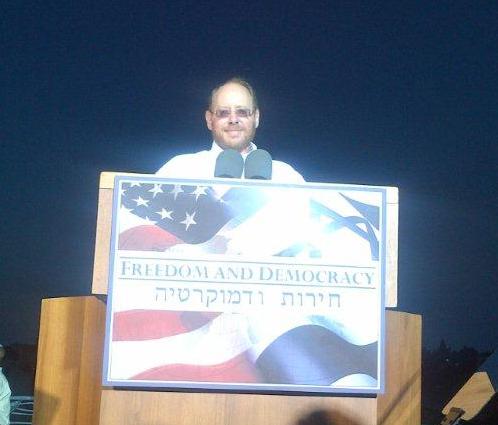