Rabbi Emanuel Rackman, the champion of halachic justice, died in December 2008 at age 98. His 70-year-long career in the rabbinate was marked by fearlessness. He stood out, bravely, ahead of the Orthodox mainstream. As Spokesman of Bar-Ilan University, I was privileged to know him well. 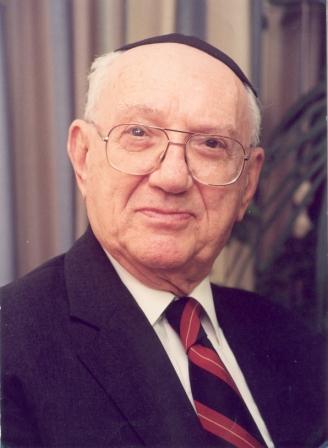 Rabbi Prof. Emanuel Rackman, who passed away on Monday in New York at age 98, will be remembered as one of the most profound and daring figures in Jewish life and thought of the 20th century.

His 70-year-long career in the rabbinate was marked by fearlessness; he stood out, bravely, ahead of the Orthodox mainstream. He was concurrently beloved and controversial.

Rackman began to make his mark as rabbi of the prestigious Shaaray Tefila (Far Rockaway, Queens) and Fifth Avenue (Manhattan) synagogues, and as a professor of political philosophy and jurisprudence at New York University, City University of New York and Yeshiva University. His eloquence, erudition in both Jewish and secular law, prolific publication schedule, and his compassion for his congregants, made him a rabbi’s rabbi.

His congregations grew rapidly, serving as an inspiration to the generation that made American Orthodoxy a viable alternative to the Conservative movement, which was still capturing Orthodox synagogues into the 1950s.

As president of the New York Board of Rabbis and the Rabbinical Council of America, he was a religious humanist. His heart embraced all the diversities and contrasts from which Judaism and the Jewish people suffer, and he constantly sought to harmonize and build bridges.

His commitment to Jewish unity explains, as well, his belief in Bar-Ilan University, whose presidency he assumed in 1977, and whose chancellor he remained until his passing. He opened Bar-Ilan’s doors to students of all stripes, turning it into one of the major Israeli campuses, while insisting that everybody could and would study basic Jewish studies — together.

Yet Rackman was no muddled, cuddly or homogenizing liberal. His modern Orthodoxy was deeply and firmly rooted in a rigorously developed philosophy of Halacha which emphasized creativity and justice.

He wrote extensively on the primacy of Torah law, on Judaism and equality, ethics and human rights, legality and morality, and what he called the “teleology” (or purpose) of Halacha. (His collected sermons, essays and newspaper columns have just been published by Ktav Press.)

It was axiomatic to Rackman that Halacha must apply in all generations and all situations; and simultaneously that, in order to remain true to God’s essential desire for justice, it must rise compassionately to meet the challenges of the modern era.

This led him to champion women’s rights within Halacha, among other issues; and this embroiled him in fierce disputes with more conservative elements in American and Israeli Orthodoxy. And gradually, it sidelined him within his own religious community, as Orthodoxy wrenched to the right.

Yet Rackman never shrank from a fight for halachic justice. In his late 80s, when most great men retire to write their memoirs, he launched his boldest and most controversial enterprise: an independent Bet Din (Jewish law court) to free agunot, women chained to their halachic marriages against their will by recalcitrant husbands. The “tears of the oppressed,” he said, were making his heart bleed, and few rabbis were willing to employ the far-reaching legal tools necessary for the task.

Using disputable Talmudic precedents for annulment, he dissolved over 100 marriages without the husband’s agreement. Rackman admitted that one of his goals was to prod the rabbinical establishment out of its slumber on this painful issue, yet insisted that the Bet Din’s technical solutions remained within the halachic envelope.

Rackman said that “the neglect of agunot by the rabbinic establishment is alienating people from Judaism. I am fighting for the glory of Torah and the halachic system, and my solutions will do more for the future of Halacha than the stringency of its mandates. I certainly feel that I can meet my Maker on this!”

Unfortunately, Rackman’s Bet Din was mismanaged, and Rackman failed to substantiate his Bet Din’s actions in a learned teshuva, a formal halachic position paper (although others have now begun to do so, most notably Prof. Aviad Hacohen, dean of Shaarei Mishpat Law College.) Nevertheless, his legacy on the treatment of agunot is considerable, and I believe that Halacha will yet come around to his view. As with many other issues, Rackman simply may have been 100 years ahead of his time.

Interestingly, Rackman became very right-wing politically in Israel, something that seemed to clash with his social and religious liberalism and his passion for Jewish unity. “There’s no contradiction,” he explained to me in 1997. “My devotions are all-embracing and absolute. I am consummately committed to the entire Jewish People and totally committed to the whole Land of Israel!” he declared.

The poet Henry Gibson once quipped about Jacob the Patriarch, who “was left alone” (Genesis 32:25), that “he who stands alone is the strongest man in the world.”