An entire generation of Religious Zionists was orphaned by the passing of the legendary Dr. Burg. His departure left Religious Zionists up on the hilltops with Hanan Porat, far from the national consensus or from influence on public discourse. 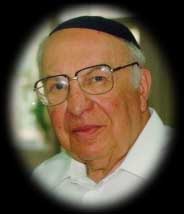 How does one do justice to the memory of Dr. Joseph Burg, one of the most remarkable Jewish leaders of this century?

As soon as the news was broadcast on Friday morning – “Joseph Burg, Minister in the Governments of Israel for forty years, long-time leader of the National Religious Party, dead at 91” – you began to hear the cliches in radio commentaries: he was a man of “compromise” and “tolerance”. Yes, he was, par excellence. But Joseph Burg was much more.

In his personal biography and political life, Dr. Burg successfully bridged worlds in a manner that so many have sought to emulate and others can only dream of. From a *Yoreh Yoreh Yadin Yadin* ordination (the highest level) at the Berlin Rabbinical Seminary — to Gymnasia Herzliyah. From a dissertation on logistical neo-positivism at the University of Leipzig — to the founding of Bar-Ilan University and perennial chairmanship of the World Bible Competition.

Burg’s public activity spanned two generations, from leadership of the *haapala* (illegal immigration to Palestine) and direction of the Paris survivors rehabilitation office after the Holocaust – to international chairmanship of Yad Vashem. From the top posts at the nascent Postal Authority and Ministry of Health when the state was in diapers — to leadership of autonomy negotiations with the Palestinians after Camp David. A bridge from decimation to national revival.

The loss of European Jewry before his eyes left a deep imprint on him. Despite the revolutionary, anti-Diaspora character of modern Zionism, it was world he was not prepared to leave behind. The weltanschauung of chassidut, including encyclopedic knowledge of the chassidic masters, their spiritual works and miraculous fables, accompanied him into the hi-tech nineties. Their tenacious world of faith was as relevant as ever, in his mind, to living in the scientific twentieth century.

He remained a European in every fiber of his body – worldly, witty, sophisticated, gentlemanly, nuanced, honest. A far cry from our prevailing political culture of *kasach* — unbridled, untamed confrontation.

Burg was a renaissance scholar with a phenomenal memory, who delighted most of all in the weekly Torah lectures he gave on radio for more than a generation. Literacy and abiding interest in all fields of human knowledge were, to Dr. Burg, the mark of a person’s value.

The spiritual, meta-historic significance of Israel’s achievement was something Burg never lost sight of, even in this cynical, post-Zionist era. He understood the resurgence of Israel in grand historical terms, as Providential consolation for the Holocaust, and sought to discern the Divine drama at play. Service of the state was a holy occupation.

At the same time, Dr. Burg insisted that everything in public life had to pass the test of reasonableness and restraint. Consequently, religious messianism, with its almost carefree abandon of regard for political reality and practical calculus, was something that frightened him.

When militant messianism took hold of political factions in his own camp and later swept the youth of his National Religious flock, Burg was at a loss. He was confounded and disturbed, in recent years, to witness the obscurantism, mysticism, anti-intellectualism and isolationism that has been taking root in large swaths of the religious and haredi publics.

Burg’s pragmatic, moderate approach to religious-secular relations in Israel – most recently, he supported the Neeman Committee’s compromise recommendations on conversion — were an outgrowth of the respect he accorded to every human being and of his understanding of “building Klal Yisrael” as a halachic obligation. If we all could only infuse our children with his sense of community…

Tradition, Burg thought, had to be part and parcel of the state’s ethos. Judaism had to made decipherable and intelligible to the modern Israeli; taught as a complement, not an anti-dote, to democracy and the rule of law. These beliefs put him at odds with Israelis on both extremes of the religious-secular spectrum.

Sitting at Dr. Burg’s side in *shul* at Renanim in Rehavia on Shabbat morning, or during a hotly-debated Bar-Ilan University board meeting, was an interdisciplinary, exciting, challenging experience I shall never forget: a *chiddush* or two of Torah commentary, a little Jewish history trivia, a philosophical aside, some sage political criticism, pithy witticisms that belied an entire ideological world beyond, always questions about one’s family and personal wellbeing. You felt a connection to greatness, linked to worlds that others have cast into history’s dust-heap.

Where does Dr. Burg’s passing leave Religious Zionism today? Stuck up on the hilltops with Hanan Porat, far from the national consensus or from influence on public discourse.