By Harry Wall, director, and David Weinberg, assistant director, of the Israel Office of the Anti-Defamation League. 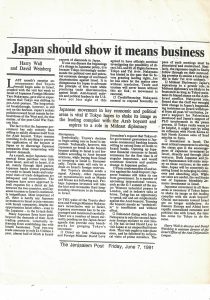 LAST month’s surprise announcement that Toyota would begin sales in Israel, coupled with the visit last week to Israel of Japanese Foreign Minister Taro Nakayama, gave rise to expectations that Tokyo was shifting its pro-Arab posture. The long-awaited breakthrough, however, is still not on the horizon. Japan’s archaic policies toward Israel remain far behind those of the West and, for that matter, of the post-Cold War Eastern bloc.

The fact is that the Japanese government has only recently been willing to mildly distance itself from the Arab boycott. Tokyo remains unwilling to do anything to prevent the application of the boycott in Japan or to discourage Japanese companies from cooperating with boycott demands.

As a result, major Japanese commerical firms purchase very little from Israel, and sell to Israel, if at all, mainly through third parties; Japanese banks extend practically no credit to Israeli banks and reciprocal visits of trade delegations are infrequent and inconclusive. The Japanese have never approved Israeli requests for a direct air link between the two countries, and Japanese tourism to Israel is statistically insignificant. Most important of all, there is hardly any Japanese investment in Israel or join ventures with Israeli companies, despite the opportunities Israel offers – even to the Japanese – in the hi-tech field.

Many Japanese firms have gone beyond the demands of their Arab trading partners, voluntarily refraining from establishing ties with Israeli businesses. Total two-way trade amounts to only $1.5 billion a year, almost half of which is Israeli exports of diamonds to Japan.

If one can discern the beginnings of a change in Japanese policy, it is because Tokyo increasingly understands the political cost and potential economic damage of continued discrimination against Israel. It is disingenuous for Japan to advocate the principle of free trade while practicing trade discrimination against Israel. Anti-boycott activists and political leaders in the U.S. have not lost sight of this discrepancy.

Symbolically, Toyota’s decision to begin selling cars in Israel is important. Technically, however, this represents no break in the boycott because selling to Israel is not forbidden according to Arab boycott strictures, while buying from Israel or investing in Israel is. Economically, Toyota sales will only be a drain on Israel’s foreign reserves.

But Toyota’s decision sends a signal. Already, other Japanese car manufacturers such as Mazda and Nissan are following suit. Perhaps Japanese investors will take the hint and reconsider their long-standing reluctance to do business in Israel.

IN THE wake of the Toyota decision and Foreign Minister Nakayama’s inconclusive visit to Israel, Japanese movement has to be encouraged and monitored carefully. There are a number of issues currently pending on the Japan-Israel agenda that provide easy benchmarks for gauging Tokyo’s intentions:

* Direct air link: Nakayama and Foreign Minister David Levy agreed to have officials continue investigating the possibility of direct JAL and El Al flights between Tokyo and Tel Aviv. Nakayama has hinted in the past that he favors granting landing rights, but he has since let the matter stew without resolution. Trade and tourism will never boom without this air link, so movement is essential.

* Credit/financing: Nakayama seemed to respond favorably to Jerusalem’s request that Tokyo offer government guarantees to Japanese commercial banking houses willing to extend lines of credit to Israeli banks. Opening up Japanese financial resources to Israeli commerce for the first time is of singular importance, and would constitute concrete and positive change in Japanese policy.

* Firm condemnation of and action against the Arab boycott: Japanese business still takes its cue from government. In a number of upcoming international venues, such as the G-7 summit of the major Western industrial powers in London, and in industry talks at home, Tokyo has an opportunity to speak out and act emphatically against the Arab boycott. Terming the boycott merely as “undesirable” is insufficient and without effect.

* Enhanced dialog with Israel: Nakayama is only the second Japanese foreign minister to visit Israel. He has invited David Levy to visit Japan at an unspecified future date. That visit ought to take place soon, and be followed by reciprocal visits of prime ministers. The pace of such meetings must be stimulated and maintained. Similarly, the Japanese ought to finally follow through on their outstanding promise to station a trade attache in their Tel Aviv embassy.

* Mideast Diplomacy: Japan’s aspirations to a greater role in Mideast diplomacy are likely to be frustrated as long as Tokyo maintains its biased stance on the Arab-Israel conflict. Nakayama confirmed that the Gulf war wrought little change in Japan’s longstanding insistence on Israeli withdrawal from all post-’67 territories, Japan’s support for Palestinian statehood and Japan’s support of PLO involvement in the peace process. If Tokyo really wants to be helpful, it might start by using its influence with North Korea to halt North Korean sales of Scud missiles to Syria.

Japanese movement in all these areas is necessary if Tokyo hopes to shake its image as the leading complier with the Arab boycott. Glacial movements toward Israel are no longer satisfactory. As Eastern Europe and Africa have rapidly normalized economic and political ties with Israel, the time has come for Tokyo to do the same.